Fishing in Ireland – Catch the unexpected
Home Coarse angling reports First annual Strokestown Festival gets off to a good start despite the...
Share
Facebook
Twitter
Google+
Pinterest
WhatsApp
Andy Burnett reports on the first annual Strokestown autumn angling festival:
The conditions were not favourable for any sort of decent fishing with average daily temps of 25 degrees plus baking sunshine and not a breath of wind, anyhow excuses out of the way and down to the fishing…
The 3 venues chosen were Cloonahee Lake, the River Shannon on the mudflats, and a new lake called Clooncullan, which threw in some mystery as no one knew if this venue would produce or not. A lot of work went into preparing the venues, cutting pegs, organising quad and trailer to transport anglers to the pegs, pre-baiting etc, and I would like to say a big thank you to all who helped out with this as without this help it would be impossible to run these great festivals.
Day 1.
Open draw and peg 3 Clooncullan was my office for the day, with not knowing how this venue would fish I had to cover a few bases. So whip, waggler, long pole, and feeder were all set up, a very deep lake so fished at 7.5mtrs on the whip where it was a touch over 6mtrs deep, had to feed a lot of bait and keep altering tactics to keep in touch with the fish. Finished the day with 57lb 6oz, narrowly beaten for overall 1st on the day by Paul Williams who had 57lb 14oz, awesome start and lovely fishing.
Day 2.
Saw me draw peg 1 on Cloonahee Lake, it was 26 degrees when we got to the lake so expectations were not good for much apart from a suntan.
Anyway set up the whip at 6 meters and the pole at 7 and 11mtrs. Filled the 11mtr line in at the all-in, and went on the whip, had 34 fish the first hour then it died, so took a look on the long pole, a small roach first drop quickly followed by a good skimmer so stayed on this line most of the match to catch fish in bursts to weigh 15lb 3oz for a lake win. 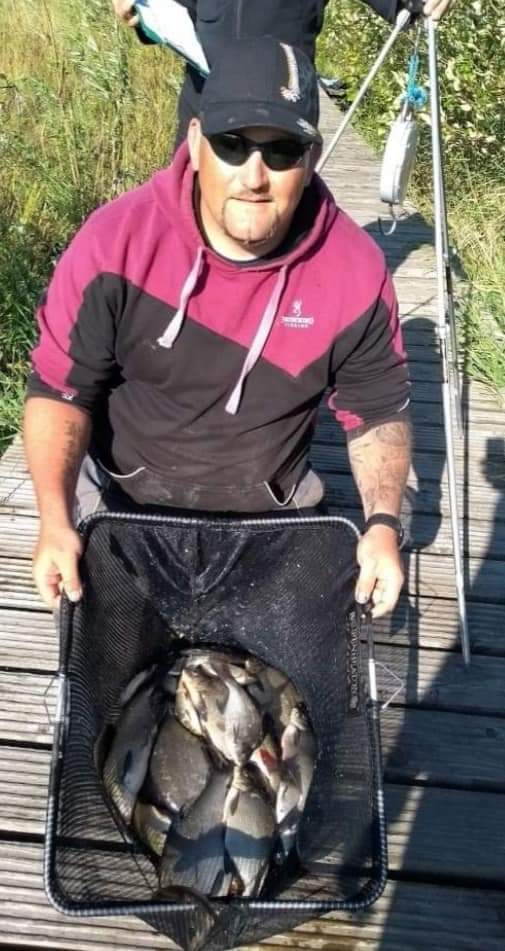 Day 3 final day
Peg 3 on the mudflats was pulled out of the bag for me which had won the previous day, set up pole and feeder, as this is usually a decent roach peg, but it soon became apparent there were very few roach about to be caught, so got my head down and concentrated on the feeder to win my section with just over 20lb of skimmers and hybrids.
Happy days, and with it being a weight festival this gave me a total weight of 92lb 13oz, keeping me clear of the chasing pack to win the festival overall, absolutely delighted to have won it and was. Good to meet new people looking forward to next time already, well done to all who fished, no moaners or whingers just a good set of lads out to enjoy their fishing.