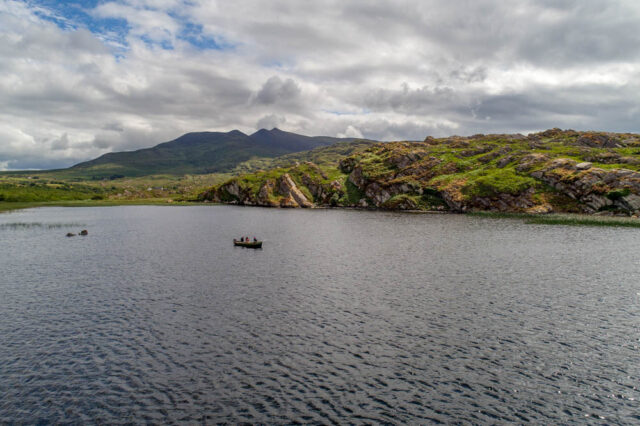 8/9/2022 I start in a 48-hour backdate and yes you are correct I failed miserably in my duties in failing to report that a Currane angler caught two Salmon, followed by two Sea Trout two days ago. Now back today’s manipulations, we start on the World-famous Butler Pool and www.watervillegolflinks.ie there were two Salmon caught by two guests fishing with their Ghillie Mr. Michael O’Sullivan of Waterville Boats and at watervilleboats@gmail.com and in the afternoon Michael’s Clients headed upstream out on to Lough Currane, as of yet I haven’t heard of any rod benders. There were a few Nice Sea Trout caught on the drift, and there was one Salmon caught on the fly. Now we head upstream again to the Commeragh river, two anglers caught two Salmon and headed for the Inny and as of yet I have no reports on their Catch and releases. Staying with the C&R Inny, I can report that there were four Salmon caught and released. Wind N and veered NNW light with reasonable cloud cover.

9/9/2022 There were a few nice Sea Trout caught on the drift, one boat reported seven Sea Trout to their boat and another boat reported four Sea Trout to his boat, on the Salmon front there was one Salmon caught on the fly. Now we head upstream to the Commeragh, two anglers caught two Salmon for themselves, and I believe they weren’t satisfied and headed for the C&R River Inny and as of yet no report on their manipulations. Staying on the Inny, I can report that there were two Salmon caught. Wind NNW light and variable.

10/9/2022 The Currane anglers were in good form again today, so straight to the action: two anglers caught a fine Grilse and a Trout in the morning and how they did in their afternoon session I can’t say as of yet, so watch this space and just for the record they were fishing out of Waterville Boats and at watervilleboats@gmail.com one local Currane angler caught a fine 8 lbs. Salmon on the troll and finished his day off with six Juniors caught on the drift. And staying in the drift department and for good reason, on the Southside of the Lake there were a good few Sea Trout landed and released by other Currane drifters. Wind light to fresh at times SE and variable. Staying with the weather they’re forecasting 32.9 mm of rainfall for Waterville tomorrow morning?

11/9/2022 Well, The Inny Anglers were satisfied with the flood,  but we start today’s manipulations on the World famous Butler Pool, and at www.watervillegolflinks.ie one US angler caught a fine Salmon on the fly, on that note we head upstream to Lough Currane, there were a few Sea Trout caught on the drift and one hired out boat caught 3 Sea Trout and a Grilse. Now we head upstream on the Commeragh River, where there were two anglers manipulating their skills and as of yet they haven’t let their fingers do the talking, so I will take it they failed miserably in their duties in the Salmon department? Now we head across the Valley to the C&R River Inny; there were 3 Salmon caught and released. Wind ESE veered SW light and variable.

12/9/2022 Just the odd Sea Trout caught on the drift, now to catch of the day, and that goes to Currane angler Jim Comerford of Beenbane, while trolling caught a cracker of a Salmon in the 14lb class. Now we head downstream to the World-famous Butler Pool and at www.watervillegolflinks.ie  where there was Salmon caught on the fly, now from the Butler Pool we go to the C&R River Inny, where there was one Salmon reported. Wind ENE light and overcast.

13/9/2022 Straight to the Sea trout and Brown trout department, all from the same boat on the drift and here are their facts of the day, 6 Sea Trout, followed by a nice few Brown trout for their efforts. For the rest of the Currane anglers, it was all quiet on all fronts? Wind NE light to fresh followed by bright sunshine all day.

14/9/2022 The Currane anglers were all quiet on all fronts this day. NE light to fresh followed bright sunshine all day.