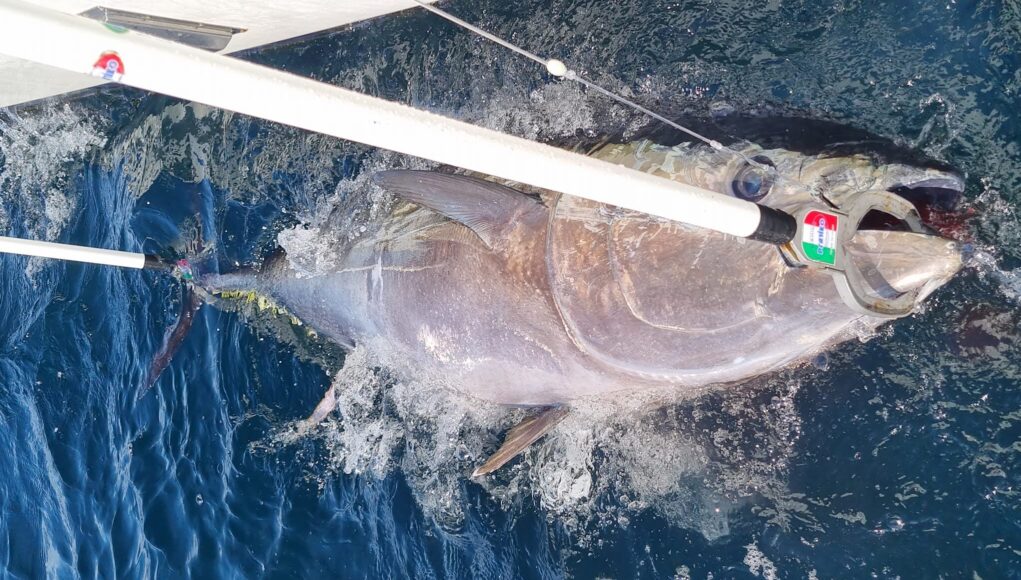 30 September: The weather is playing havoc with our plans to target the large Bluefin Tuna off the West Cork Coast but we still managed to tag 3 very large fish this week between 575 and 690lb in weight.

We have frustratingly also had a few fish drop the hook and saw much bigger Bluefin approaching our lures.

It’s been some great craic when we have been able to get out but time on these fish is limited and the weather is still not forecast to give us good conditions to target them.

02 October: A great day to be at sea today. Our angler Jomi flew in from Zurich yesterday to try Bluefin Tuna fishing off West Cork. Within 15 minutes of getting our lines out he was into a large fish that dropped the hook at the boat before we could tag it.

The sea was alive with Whales and Dolphins and wherever we fished, giant Fin Whales were surfacing for miles around us. Along with Minke and Humpbacks it was an amazing display of what our waters has to offer at times.

Jomi was here for Bluefin though and did manage to get 2 fine fish of 450 and 600lb alongside for tagging.

Weather means his second day with us is cancelled but he has some incredible memories to take back to Zurich with him on Tuesday. No matter how many Bluefin you get, the excitement of the take never fades.

05 October: We should be out looking for Bluefin but the weather has deteriorated at the worst possible time just as our season was kicking off.

While I was sulking I looked through some of our catches so far in 2022 and realised we have had 4 different species well past the 100lb mark. We’ll have to go some to better that in 2023 but the elusive Mako and Thresher are a possibility and there’s a few sixgill out there if weightlifting is your thing.

Here’s hoping for a settled spell before the tuna have gone.