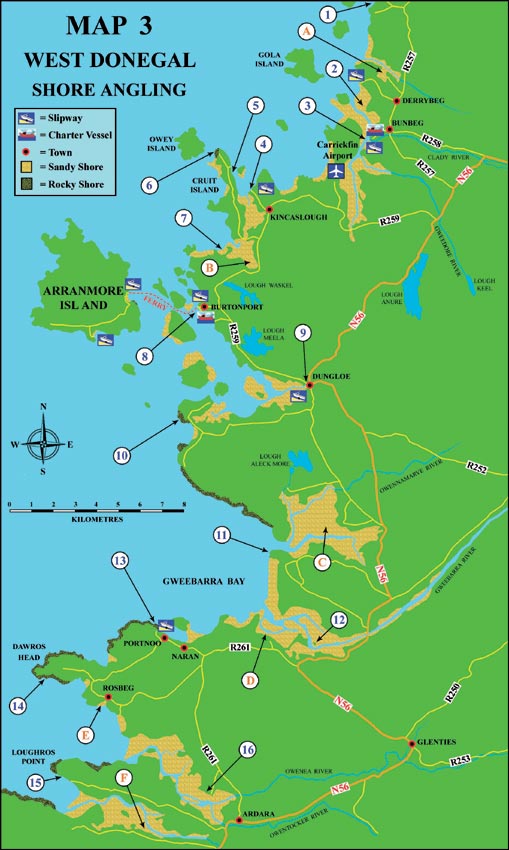 Off the R257 road between Buninver Point and Glashagh Point (1) are several rock platforms, which offer rough ground fishing for pollack, mackerel, coalfish and wrasse. This area is best fished in autumn during calm spells.

In the Derrybeg Estuary (A) lugworm and white ragworm are plentiful, and can be collected by trench digging along the channel banks at low tide. The main access road is found by turning west off the R257 below Derrybeg village.

Maghera Point (2) north of Bunbeg, offers spinning and freelining sandeel in the main Gweedore River channel for seatrout. Bottom fishing using lugworm or crab baits produces flounder and freshwater eels. The last hour of the ebb and first two hours of a flooding tide is the optimum period. At the northern end of the bay, below the golf links is a small pier and slipway which affords good launching for small boats, except on low tides on springs. Inshore boat fishing in the area especially in the “Gola Roads” between Gola Island and Inishinny Island, is for dogfish, dabs, and flounder over sand with pollack, ling, coalfish, and cod over rough ground to the west of Gola.

Bunbeg (3) has witnessed a major modernisation in recent years and the slipway is now viable for the entire tide. Small boat fishing in depths of around 15 metres over sandy ground is excellent outside the harbour in Inishfree Bay, where ray, dabs, plaice and dogfish can be expected.

In water up to 45 metres deep, to the north of Owey Island are haddock, whiting, gurnard and cod. Dark coloured feather lures, such as “Black Widows” baited with mackerel or lugworm work well there. Tope are very numerous in this area at times and depending on your viewpoint can be so plentiful that they provide a memorable fishing experience or they destroy a good days sport.

Shore fishing in Bunbeg Harbour produces conger to over 13kg, at night from the quay wall while float fishing yields mullet, small pollack, coalfish and wrasse at high water. South west of Bunbeg on the R259 road is the village of Kincaslough (4). A sheltered harbour lies 1.5km from the village and spinning from the quay wall accounts for mackerel, pollack and coalfish. Casting out over sandy ground produces flounder, dabs, and occasional codling. Inside the harbour, float fishing can be very good for mullet, although small coalfish, locally called “glassaun”, can be a nuisance at times. Bottom fishing close to the pier can be very rewarding for conger and fish over 9kg are not uncommon particularly on night tides. To the west of Kincaslough village a road runs west along the shore of Cruit (pronounced Crutch) Strand before turning northwest onto Cruit Island. At Cruit Lower (5) in the tide race between the mainland and Inishillintry Island, bottom fishing from shallow rocks over sand affords excellent opportunities for tope, ray and dogfish on sandeel and mackerel baits. These predatory species move up the channel, behind a flooding tide which fills out into Cruit Strand to the south. The first two hours of the flood sees concentrations of fish moving through and this is the time to be on station. Fish will also be taken when the tide starts pushing out of the bay after high water although fishing time is restricted to about one hour only. Flounder and plaice will also be taken on worm baits at high water. There are several large, flat rock platforms on Cruit Point (6) directly opposite Owey Island. Here the water is over 16 metres deep but care should be taken when a swell is running as the rocks can become awash very easily. In calm weather, however, spinning can be excellent for pollack to 3kg and coalfish to 2kg. The sink and draw method, where the lure is cast out and allowed to sink, then retrieved in short bursts, works best, using the heavier versions of well known lures such as koster, toby or krill. Bottom fishing produces conger, rockling, wrasse and dogfish, but tackle losses are almost unavoidable due to the extremely rough nature of the ground.
South west of Cruit Island on Keadew Strand (B) black lugworm are plentiful. Clams can also be dug on the channel banks.

Portacurry (7) is a small north west facing sand and shingle beach which can be productive for flounder, dabs, small turbot, plaice, and dogfish. During calm spells, ray can also be taken especially on baits cast well out.

The commercial fishing harbour at Burtonport (8) is sheltered behind a veritable maze of islands, the most notable of which is Aranmore Island. Navigation in and out of the harbour is difficult for the inexperienced, although a pathway through the maze is marked by white pillars on many of the rocks and small islands. There are excellent facilities for the small boat angler in Burtonport, while the boat fishing off Aranmore in depths from 30 to 60 metres yields a wide range of fish including blue shark to 36kg, spurdog to 5kg, pollack and cod to 4.5kg, haddock to 2.5kg, and john dory to 2kg. All the gurnard family are also present as are whiting, pouting, ling and conger. A fast modern, charter vessel is available from the main quay but generally has to be booked well in advance.

Shore angling from the quay produces conger at night, while float fishing in daylight should yield mullet.

The town of Dunglow (9) famed in song and verse, sits at the head of a wide west facing bay which is sheltered at the mouth by Inishfree Island. There are two tackle shops in town and although they tend to specialise in freshwater equipment, much of this can be adapted for saltwater use. From the pier, mullet can be caught at high water. Pre baiting is necessary, to keep the shoals around the pier, otherwise they tend to spread out over the mudflats in search of food as the tide rises.
By taking the road along the southern shore of the bay, out of Dungloe for some 5 kilometres, one arrives at Maghery Strand. At the northern end of the beach is a large rocky promontory called Termon (10). Spinning from there, accounts for mackerel, pollack and occasional seatrout. Float fishing close to the rock produces wrasse, while casting out over the sand will result in flounders and dabs.
South of Termon the coastline swings around the high ground of Crohy Head and into the vast expanse of Gweebarra Bay which holds some of the finest inshore boat fishing in Co. Donegal. A wide variety of fish is available there to small boat anglers including tope, ray, turbot, cod, whiting, plaice, dabs and dogfish. The north and south eastern corners of the bay are comparatively shallow and drain two large estuaries. To the north, Trawenagh Bay (C) is an exceptionally good bait gathering area, and as the tide recedes, acres of lugworm beds are exposed. The lugworm on the channel banks are large and black. Clam and white ragworm are also quite numerous. Towards the lower reaches of the bay, around Trawenagh Point, sandeel can be dug in numbers, from the sand during the summer.
At the south eastern entrance to Trawenagh lies Dooey Point (11). Spinning in the channel produces mackerel and seatrout on a flooding tide. Bottom fished baits will turn up flounder which, although not very big can be very numerous.
The southern estuary is formed by the Gweebara River as it winds its way to sea. There are several locations on the channel banks where seatrout can be caught while spinning or freelining sandeel. Illanfad (12) is one of the most favoured angling stations in the estuary where as well as seatrout, freshwater eels and flounder can be taken.
Lugworm are plentiful on White Strand (D) and sandeel can be dug on the channel at nearby O’Boyle’s Island.
The villages of Naran and Portnoo (13) are very popular holiday locations lying 3km off the R261 road. Portnoo possesses a neat little harbour and slipway where boats can be launched to explore the angling on Gweebarra Bay. To the west of the harbour is a large basalt rock which has sand running all the way into its base in 7 metres of water. Dogfish, plaice, dabs, flounder, turbot and ray can all be caught on bottom fished baits while spinning accounts for mackerel, launce, and pollack. Float fishing close to the rock produces wrasse and small coalfish. Two hours either side of high water is the best period. In summer this is a popular angling location and those keen to fish there would need to arise early!

South west of Portnoo lies Dawros Head (14), where excellent rock fishing is available. The rocky ground appears to be almost unbroken for most of the way around the Head, and the hotspot is just inside the south western corner where several deep kelp gullies are within easy casting range. The bottom there is very rough and tackle losses can be heavy, particularly in summer when the kelp is at its thickest. Perseverance will be well rewarded, on bottom fished baits, with good bags of conger to 11kg, dogfish to 1.5kg, and big wrasse to 2.5kg, (well over specimen size). Spinning yields fine shore caught pollack to 4kg, mackerel and coalfish.

South east of Dawros is the small seaside village of Rossbeg (E) where lugworm and white ragworm are plentiful in the main channel banks. Peeler crab can also be gathered around the base of the rocks bordering the mouth of the bay.
The fishing on Loughros Point (15) is very similar to that found at Dawros. Indeed the south western side is also the best area to fish. The bottom is boulder strewn and weedy but seems to be alive with dogfish and pollack in particular. Specimen dogfish up to 1.70kg have been recorded there.

In the estuary formed by the Owenea and Owentocker Rivers, flounder and eels are very common to bottom baits of crab and sandeel. Spinning or freelining sandeel will result in seatrout on a flood tide. The area around Ranny Point (16) about a mile west of Ardara is a popular angling station with local fishermen. There is a well stocked tackle shop in Ardara.

To the southwest of Ardara, on the Bracky River estuary at Maghera Strand (F) there is good digging for lugworm, white ragworm and clam.