Same group in fishing with me all last week and they had a good range of fish but the highlight had to be last Thursday when we hooked into another Six Gilled Shark and then followed up with a Specimen John Dory. Each a great catch!

The week started with a wet day on the drift fishing for a range of fish and doing a lot of shad fishing. This produced some fine Pollack and some other species. Then we had a Tope session the next day and although conditions were good this was slack enough although we did have one fine 36lb male fish in the boat. I think it is safe to say we are coming to the end of our Tope season here and although I would still expect to get them from time to time they will not be so reliable going on past experience. We also had a couple of very busy Wrasse sessions with the group enjoying this type of fishing. Another day on the drift well out on the wide turned up a couple of fine Spurdog among other fish but it is always hard to get these lads away from the lead head shads fished on spinning rods, so that form of fishing was used more than baited hooks.

On Thursday with good conditions we headed for a mark that has produced many good fish for me including Conger, Skate and on at least on occasion each year over the last five, some fine Six Gill shark. One of the lads decided to fish “heavy” and we put on a skate trace with a big bait. We did not have to wait that long for a heavy bite and although we got plenty head shakes early on, after an hour some people on the boat we talking about “being stuck in the bottom”! But shortly after that there was more obvious movement as the fish tired and started to come up before heading back to the sea bed. Another hour gave us our first look at what turned out to be a Six Gill shark of 3.5mtrs length and an estimated 600lbs. Luckily the hook had stuck right in the scissors of its mouth so the mono trace was clear! What a monster to see on the surface. After lots of photos and some film it was turned loose. As if this was not enough for the day, the lads were again back at the shads and just as we got to lines up one of them landed a fine Specimen John dory of 2.31kg or over 5lbs! 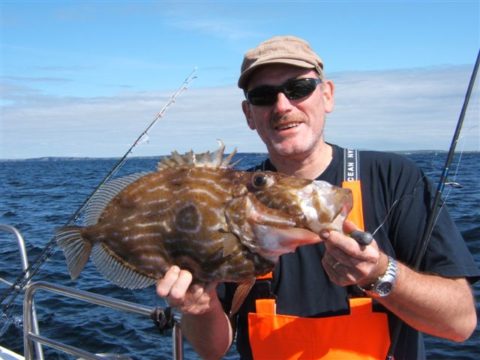 As the wind picked up for the end of the week we fished more in the estuary, but as the Mackerel had moved well into it we had plenty easy bait and they seemed to also have tempted some fine Pollack into the estuary. The best of these was almost 10lbs which was a fine fish for that area. We also had a fun session on Thornback ray and Doggies with plenty of fish coming to the boat. 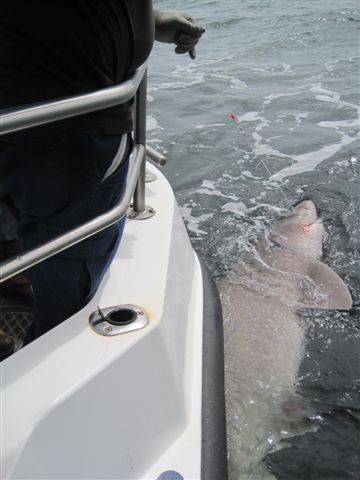 Just today I had another day charter out and in quite calm conditions we had a good mix, including plenty Whiting and Haddock and a couple of fine Cod.