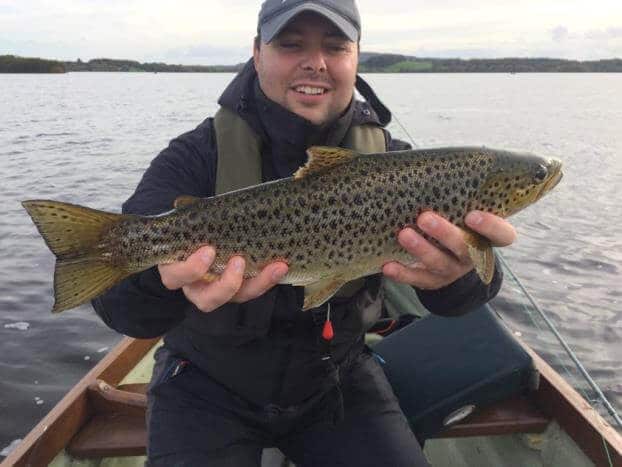 ‘Nobody said that it would last forever, that doesn’t mean we didn’t try to get there’
Lewis Capaldi

Once we step into the month of October for Lough Sheelin it seems as if we are in the wrong place at the wrong time – intruders on a lake whose piscatorial inhabitants have moved on to another more important phase, the one of spawning. As the curtain gradually came down on the fishing season here it felt as if winter was already knocking on the door in the form of very high water levels, falling leaves and chilly breezes.

There are always anglers who fish the final few days of the season on Sheelin, wringing out that last bit of enjoyment while privately, I imagine, clinging on to the possibility of catching a fantasy weight.  Some lovely trout were caught, particularly in the earlier part of the week but the continuing high water levels and cold temperatures meant that the vast majority of these fish were caught on lures using di 3 and di 5 sinking lines.

The present flooded levels of Sheelin reminds me of the reply an angler gave to me recently when I asked him where he had caught his lovely 4lb trout – ‘sure, in the field’ and I knew exactly what he meant.

Anglers reported encouraging numbers of small 8” to 1lb trout particularly from Derry Pt. to Long Rock. Some trout were boiling just below the flies but then appeared to lose interest.  There was some pitching but mostly there was little or no evidence of trout movement, certainly not in the surface layers.

The best areas for fishing (wind dependent) were primarily Merry Pt., Stony, the Long Rock, and Derry Pt. down along Derrahorn, Gaffney’s Bay and behind Church Island.

The influx of cold fresh water meant that many fish were staying put in the lower depths so it was the lures that worked best on lines that got them down deep. The most popular were the Humungus, Minkies and the Snakes.

On a lake that unofficially prides itself as being a fly angling Mecca I always hesitate when talking about lures as I can almost sense the disapproval coming from the fly casting purists but lures have their place too and this week it was all about the Snakes which worked particularly well – Black & Grey (with a Muddler style head), White & Green and Green & Black fished on a Di5.  Snakes are not new by any means and have taken the still-water fly fishing scene by storm over the last 2 or 3 years with the help of the internet.  These are highly mobile patterns and can often induce lethargic fish into a response even if they are not feeding naturally, a medium paced figure of 8 with a long pull halfway through retrieve got impressive results here, with Lithuanian angling friends Darius Admomaihes and Jokubas Banis landing 10 trout for the week averaging 4 to 6lbs.  Lures like the snakes and cat’s whiskers can be a quick fix to a traditional fly angler when the going gets tough meteorologically.

Back to safer ground, the flies that worked for over these past few days were the Silver Daddies, the Dabblers (Fiery Brown, Claret, Green, Pearly Green (size 8 & 10) Gold and Silver), Golden Olive Bumbles, the Silver Invictas, Black Pennels, Bibios and the Octopus. The traditionals with hopper legs added in were particularly good and a silver, green or gold glint through the tying seemed to be the essential ingredient.

The 2019 fishing season is now closed on Lough Sheelin (for all fishing) until March 1st 2020.

The fishing has been undeniably tough because of measures outside our control, mainly the weather but true anglers general accept the ups and down and thankfully the magnetism of Lough Sheelin whatever the obstacles seems to remain embedded in the hearts of those hundreds of anglers who return year after year to fish this mercurial jewel.  As one Cork angler put it ‘tell me a better lake than Sheelin’ and I can’t.

Lough Sheelin will be waiting for its anglers next year –

Venisti remanebis donec denuo completus sis.
(From whence you came, you shall remain until you are complete again)