Fresh from picking up a specimen cert for a Spurdog in last month’s ISFC awards, 12 year old specimen angler Nichola Ward was back at it again this week and she really pulled out the stops to land a great Ferox trout weighing 13lb 8oz and this super fish wins our Catch of the Week prize. 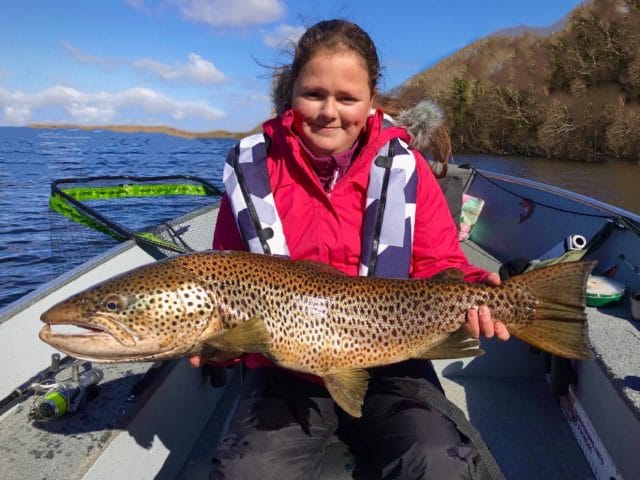 Nichola was fishing with her Dad Nicky, himself no stranger to the specimen scene and they were fishing with expert Ferox angling guide Tomi Kurman who describes the catch in his own words:

“What you can see on the photos is Nichola Ward and her dad Nick Ward, just few moments after this super cool 12 year old young lady landed that great fish! She played her new record to be (and first ever trout) all by herself. I just snapped the rod from the holder, and passed to her. Then my job was just to cheer her up, and just to tell when ease off the pressure or when to reel in as fast as she could… and later off course just to net the fish

😉
I’m happy and proud to say that she did PERFECT job, even if she was little tired to hold the fish for the photos

😉 Trout ran away few times, but even for the moment I didn’t lost a confidence that she will land that one !!!
She even released it on her own and trout swam off in perfect condition!!!
It was a pleasure to be a part of this special moment, sharing happiness with herself and her proud dad Nick

🙂
Nichola isn’t new to catching some great fish, and this trout is NUMBER 4 specimen fish on her account !!!”