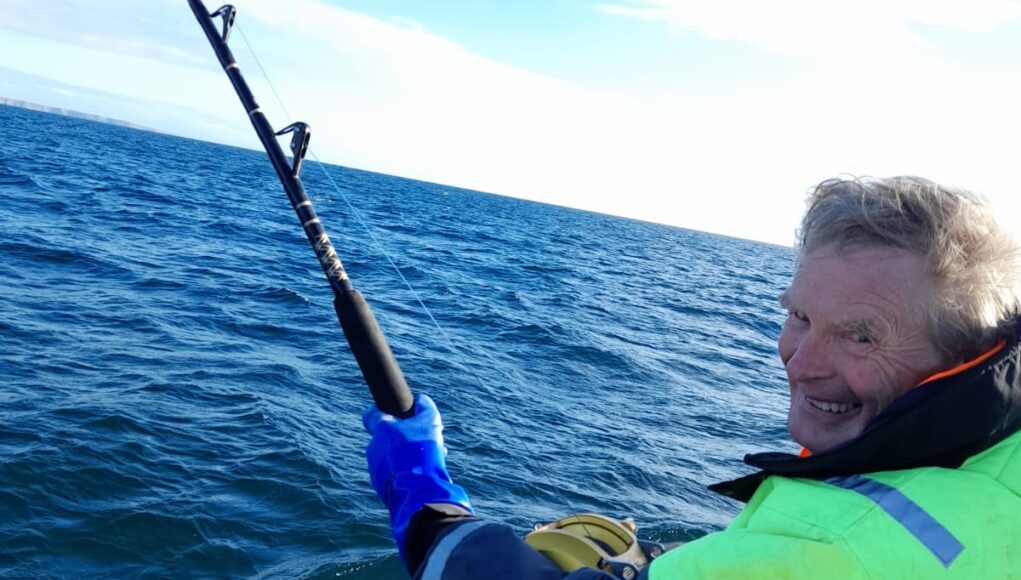 We had a epic day on Saturday fishing for bluefin tuna. We left at 9:00am and from the get go we were after trolling over large bait balls with tuna and whales feeding. At 10:40 we were hooked into the first bluefin of the day. The reel was screaming and it Anthony Austin from Crosshaven S.A.C. who was up first. After a 35 minute battle the fish came to the surface. He was safely tagged measured and released.

After a short steam to another bait ball we got a blind strike. Second fish of the day went to Jason Walsh. This one was a very lively tuna. But Jason stuck with it and after 25 minutes he got the fish to the surface. Second one safely tagged and released.

We were seeing birds working just ahead of the boat. So we quickly got the gear back in the water. We had four rods out, three with spreader bars and one with a daisy chain. I roared at the lads to look out the back of the boat as a tuna came up and missed the lures. That’s when all hell broke loose and two rods started screaming – double hook up! Our first one of the season. The two fish crossed so we quickly switched the rods over from port to starboard. We had the two Brians on the rods together. Brian Kelleher was first to get his fish to the boat after 20 minutes. It was just as well as we still had Brian Clancy on the other rod with the reel in low gear keeping the line tight. Ten minutes after releasing the first tuna we had Brian Clancy’s bluefin ready for tagging and releasing. It was another fish in around the 83 inches mark that swam off safely.

We were saying to ourselves this is a great day’s fishing. Little did we know it was going to get even better. I’d say forty minutes had passed and Derek shouted to the lads that there were tuna busting ahead. We were just getting to the bait ball and the rod started screaming again. Aaron Byrne was in the hot seat this time. After a 40 minute  battle we started to see the colour of the bars you could see Aaron’s face was beaming with delight. After losing one on a previous trip he was glad to be only a few feet from the tuna. This was number five safely tagged and released.

We had six lads out on this trip. So everyone was thinking wouldn’t it be great to get one more to top off the day. Well we didn’t have to wait long and last but not least, Jason Thompson was in. It was the biggest fish of the day. He ran so hard he burst the spreader bar off the main link line. What a fight he had it was a wild fish. He was up on the surface three times then he’d go deep again.

After 45 minutes he came to the surface all 93 inches of him. We got a few pictures of him being tagged and released. Everyone had smiles on there faces. Everyone on the boat had a fish to themselves.

Derek is running tuna trips on Rebecca C until November if any one is interested give him a call on 0861720342.

Situated by the working pier of Ballycotton, Pier 26 is an eclectic mix of old and new: a welcoming traditional pub, an award-winning restaurant, and a stylish, comfortable B&B. You’ll always find a warm smile, an ear to listen and some of the best craic in Ireland! In 2020, Ballycotton Sea Adventures is running specially chartered fishing vessels straight out of Ballycotton, giving you the chance to catch anything from Bluefin Tuna to Two Spotted Goby. And blue shark too of course!