The East Mayo Anglers have sent in the below report highlighting their commitment to help salmon preservation:

East Mayo Anglers’ association, the largest and most extensive club located on the famous River Moy, are now a number of years into an annual competition aimed at encouraging more anglers to return salmon, thus conserving fish stocks. The Swinford 250 Perpetual Cup (sponsored by the Swinford 250 and More Organization) was initially presented to the winner of the largest fish caught and released during the fishing season. Following its success, the competition has now been extended to include all associate and full members who catch and release any salmon greater than 7lb. For the 2021 season, anglers releasing a salmon with satisfactory proof of the fish’s size/weight by way of witness, photograph or video are now entered into a draw for up to €1,000 worth of angling related prizes. This is all thanks to our generous sponsors, Chadwick’s Ltd, Premier Wealth Management, Tiernan’s Tackle, as well as club members David Hawley and Enda Conboy. The prizes are split equally amongst ten lucky winners drawn out of the hat at the end of the season.

The competition runs from opening day until the end of the season, and early signs are that it’s having the desired effect. In 2020 East Mayo reported 903 fish caught by all methods, of which 304 were returned, which equates to 33.65%. In 2021 the catch report details 952 fish recorded caught with 406 fish returned, equating to 42.66%. This 9% increase in one year proves the initiative is working due to the support of members and visiting anglers and that the club’s effort to promote C&R are going in the right direction. Of course, returning any size of fish is helpful to the long-term survival of the species, but the idea behind the competition minimum size is to encourage the return of the ‘big fellas and girls’ those fish with much greater numbers of eggs and milt, fish that were once seen as ‘trophy fish’. So, hats off to the committee, past and present, the club members and those anglers who have helped in every way to get this initiative off the ground and make this annual trophy one that any angler would be proud to receive.

Remember that in returning a salmon, every effort should be made to do this in the least harmful way possible to the fish. To see ideas on how to return fish carefully and safely, please visit the East Mayo Anglers website, where you will find an article offering tips. 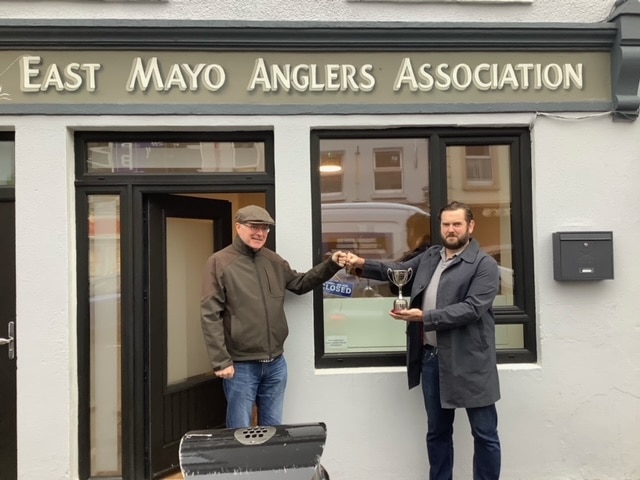 Pictured above is the winner of the Swinford 250 Cup for 2021, Paul Kelly (on the right), being presented by club Chairman Ben Baynes. Paul caught a magnificent 15lb fish on the spinner at Ryan’s pool on 12th September. Well done Paul! 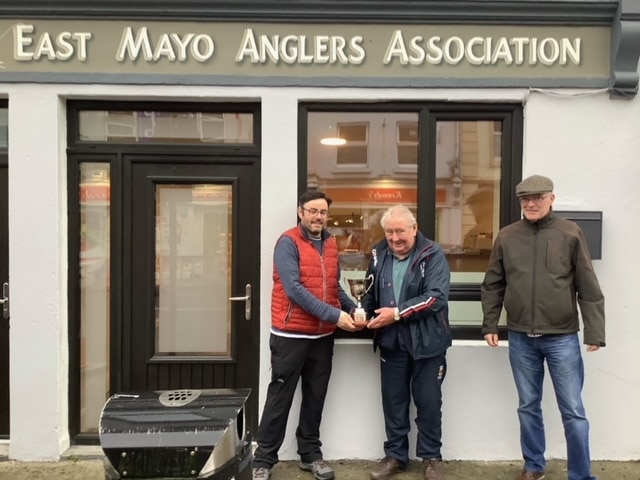 Pictured above is Mixie Clarke, Winner of the Conor Walsh Memorial Cup, being presented the cup by Michael Walsh, brother of Conor, former committee member and avid fisherman. Mixie caught his fine salmon of 9.5lbs on 25th March on the spinner. Well done Mixie!! A lifelong club member and very deserving of his award for the hours and years fishing he has put in.