Last week we brought you news of the Irish U20s team, who IFI are proud to have sponsored to participate in the Coarse Angling Youth World Championships in Slovenia. Well this week we are privileged to be able to bring you the news that our very own Charlie Richards came out on top of all of the competing anglers to win the individual Gold Medal! This report from the National Coarse Fishing Federation of Ireland who organise and support Irish teams competing in FIPsed angling championships:

Team Ireland travelled to the River Sava in Slovenia to fish against youth anglers from 14 world nations. The Under 20 team consisting of seasoned juniors Rhys Walsh and John Browne along with Charlie also included two young anglers Brian Clarke and Donagh McSherry making their first appearance on the international circuit.

The team did well during the practice week catching the bonus fish required to fish against those teams experienced in catching small fish, mainly bleak with small vimba and chub. Yet it was Charlie who during the competition weekend was able to hold his own in the small fish race, netting small carp of 70 to 90g the equivalent to 10-12 bleak. Third in his section on day one Charlie finished first in section with 6kg 48g on day two to finishing with 8kg 512g. This helped to stretch his advantage as he finished an equal 4 points with England’s Callum Jennings 7kg 791g and Slovenian Kemen Rožič Šoštar securing the gold medal on weight.

The 17-year-old from County Leitrim first made his debut on the world stage with the Under 15 squad at the Youth World Championships in Inniscarra in 2017, and has now made history for Irish coarse angling as the first youth medalist.

Team Ireland ranked 12th at the 35th World Coarse Angling Championships for the Under 20’s organised by the world freshwater sport fishing body, FIPSed Fédération Internationale de la Pêche Sportive en Eau Douce. The squad led by Manager Gavin Walsh was supported by coach James O’Doherty and the parents of those participating were assisted with funding from the federation and Inland Fisheries Ireland, with their groundbait sponsored by Sensas.

Charlie takes the plunge to celebrate his success
1 of 3

The NCFFI’s Youth Team Manager Gavin Walsh who previously led a junior squad to a gold medal team win at the Celtic Cup in 2011, says: – ‘I am extremely proud of all the team and delighted to see the passion and hard work from Charlie come good for him as an individual. I hope this gold medal will revitalise the dreams and ambitions of young anglers across the island and keep coarse angling sport relevant’. 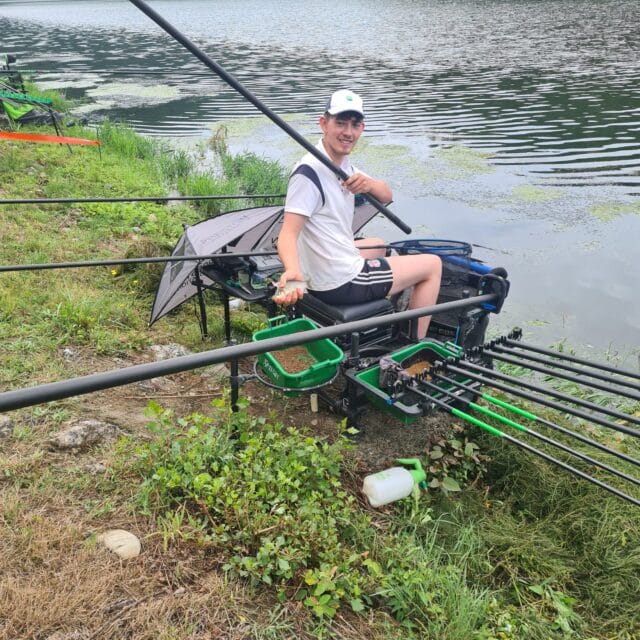 The National Coarse Fishing Federation of Ireland, NCFFI is a not for profit, non-funded NGB has represented coarse and predator angling across the island since 1963. The federation presents up to nine teams on the world stage annually and supporting coarse and predator at home has hosted six world championships since 2013, including the World Youth Angling Championships of 2017 on Inniscarra Lake in County Cork.