Lough Gowna consists of a number of large basins connected by short river stretches and channels. It is the principal pike fishing water in the upper reaches of the Erne system covering approximately 1,178 hectares. It is fed by the River Erne which rises 20km upstream of the lake entering and exiting that part of L. Gowna known as Lisanny and Derries on the eastern shores of the Lough. There are good stocks of pike in this lake system and excellent stocks of fodder fish. Pike up to 30 lbs. (13.60 kg.) are recorded annually at this venue.

Lough Gowna provides very good pike fishing with excellent access and facilities and there are many stretches which provide good bank fishing. Most of the shore fishing is accessible from public access points and is generally on clean fishable shores. The main areas of the lake are best fished from a boat. Boats can be easily launched at Dernaferst, Lisanny and Dring. It is also possible to launch boats at Cloone, Aghanoran and Corfree. Lough Gowna is quite a shallow lake with depths averaging between 2-8m but greater depths up to 15m are to be found at the southern part of the lake near Dring. Lough Gowna produces pike all year round but the most productive periods tend to be early in the season from March to May and toward the end of the year from September to November. However, fishing may be affected by water temperatures and weather conditions. 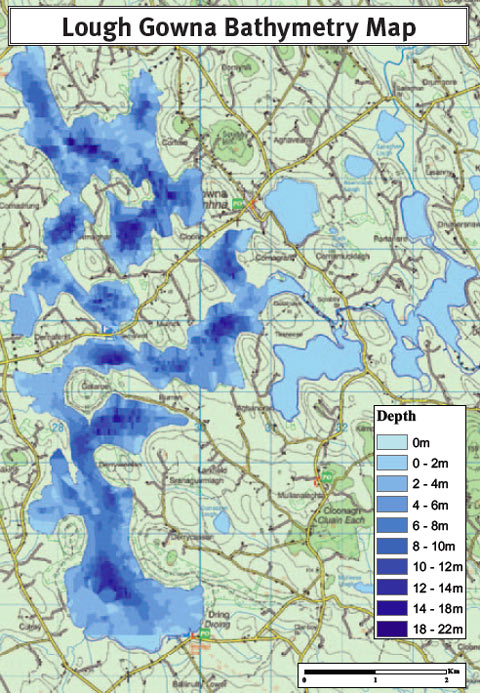 Dernaferst is located approximately 3km south west of Gowna village. The car park is located between the north and south lakes and there is a public amenity area. Boats can be launched from the north and south shores. The north and south basins are connected by a narrow shallow channel which is navigable in all but the lowest summer water levels. The boat launch here also facilitates access to the well known Church Lake stretch. These areas adjacent to the car park are generally shallow with clear gravely shores. As these shores are favoured destinations for coarse anglers from spring to autumn shoals of fodder fish such as roach and skimmers gather to feed and attract pike to these swims. All methods can be effective in these areas.

Lisanny is located 3.5km from Gowna village and is accessed off the road towards Ballinagh by turning right after Sallaghan Bridge. The car park and boat launching area is located on the right hand side approximately 2km from this turn. The lake is one of the smaller basins of the Lough Gowna system and differs in character from the other basins on the lake by having a greater amount of emergent vegetation such as reeds and rushes. Lisanny is also popular with coarse anglers and pike are regularly in evidence at this location. Pike also congregate on occasions around the inflow and outflow of the River Erne attracted by seasonal movements of shoals of fodder fish. These generally shallow areas are best accessed from a boat and sink and draw dead baiting can be particularly effective.

Dring, at the southern extremity of the lake, is located off the Granard road approximately 7km from Gowna village. There is a large slipway for launching boats and a spacious car park. Dring gives access to the entirety of the southern basin of Lough Gowna and some of the deepest water located off the eastern shore of Inchmore (Church) Island. Noted fish holding areas including the Woodville or “Rhododendron Shore” located on the eastern shore and the bays at Aghakine on the western shore of the lake regularly produce good pike fishing. On occasion pike can be seen feeding on fry in the shallow margins and using smaller baits simulating fry during these periods can be particularly effective.

Aghanoran, on the eastern shore of the lake, is located off the Granard road approximately 3km from Gowna village. Boats can be launched from the public car park on this basin and access can be gained to the Lisanny – Derries, Church Lake and Dernaferst areas through interconnecting river channels. This area is characterised by its extensive areas of shallow interspersed with small islands. These shallows can be very productive during the post pike spawning period in the springtime. This area regularly produces pike in excess of 20lbs.

Pike angling in the Erne catchment

All about pike fishing in Ireland