As part of the preparations for the 23rd Pike Challenge between Britain and Ireland the British team were out at Plassey 2 days in advance of the competition  but only managed a couple of small jacks fishing this normally productive stretch of the Shannon. They were out again the day before the competition on a different stretch, but again they did not fare well. The Irish team caught a few 5 pounders and a 10 pounder along with a few small jacks on the practice days.

Things changed for the competition, fished on Saturday and Sunday, and Ireland finished the first day of the Pike Challenge with a big lead. The 10 man Irish team caught 58 pike for 203 lb 07 oz while the Great Britain team caught 37 pike for 120 lb 07 oz giving Ireland a lead of exactly 83 lbs. The top 3 anglers on the day were all Irish

Best pike was caught by GB angler Mike Fretwell at 17 lb 09 oz.  Nobody blanked though a certain Irish angler left it very late to catch a fish ( a tiddler ).
FYI Local angler Kevin Foley who was out with the guys on the practice session went back to the same location on Saturday and nabbed a lovely pike of 21lb 02oz!

Day 2 was fished at Castelconnell. The Irish team fished well once more and although the GB team almost doubled their catch, Ireland won the 23rd Ireland Vs Great Britain International Team Challenge by a very comfortable margin. Ireland  caught 130 pike for 394 lbs 02 ozs, while Great Britain had 71 pike for 204 lbs 09 ozs giving Ireland a  winning margin of 189 lbs 09 ozs.

Just one double was caught on the final day. That was Mick O`Connors 10-15.

The top 5 bags over the 2 days were

The best pike remained with GB angler Mike Fretwell who weighed in a 17-09 on the first day of the competition. 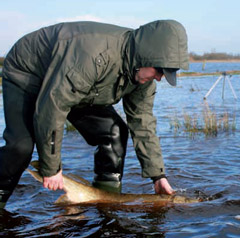