Wednesday, 8th August 2018: The European Union has introduced new regulations for the Irish seabass recreational fishery, which is now operating on a catch and release basis for 2018.

The new rule which applies to Ireland  states: ‘In recreational fisheries, including from shore, in ICES divisions 4b, 4c, 7a to 7k, only catch-and-release fishing for European seabass shall be allowed. It shall be prohibited to retain on board, relocate, tranship or land European seabass caught in that area.’ The new regulation sees a consistent approach being applied throughout the Irish coastline.

The strict bass management regime currently operating for Irish waters is based on a heavily controlled and restricted recreational fishery. Bass anglers have an extremely positive approach to bass conservation using ‘catch and release’ alongside good handling in order to maintain the species and their recreational activity.

Inland Fisheries Ireland would like to acknowledge the support of anglers for Inland Fisheries Ireland’s ‘Citizen Science’ Bass Conservation Programme. Anglers, through their conservation-oriented ethos, have been the key stakeholders in supporting research into bass stock status over the past five years by providing catch and fish stock data, which has underpinned provision of scientific and management advice. 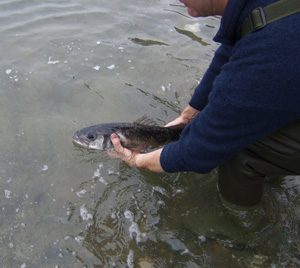 The new regulations can be viewed here.