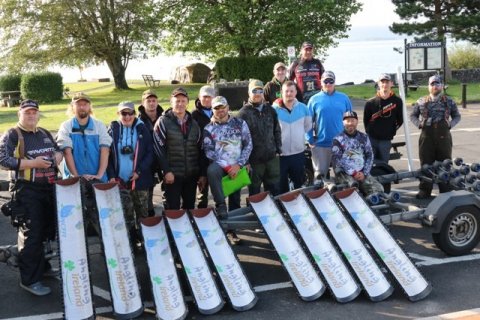 Ireland’s top lure anglers took to Lough Derg at the weekend for the first round of the qualifiers and team selection for 2020.

Bright sunshine and little wind made it difficult for the eight competing boats fishing in pairs looking for a place on Team Ireland. Whilst the perch were moody and difficult to locate, constant changes in lure presentation paid off but it was quickly evident the way to win the day was to catch pike. Tomi & Jacek did this well and were clear winners on day one with an impressive 89, 048 points! A few pairs struggled but kept trying and didn’t give up to the end

Day two brought better weather to Mountshannon, overcast with less wind and some drizzle. A few pike topped up with some nice perch saw some reasonable catches evenly across the teams and some serious mixing of the rankings.

It was fantastic to see new faces taking part with this competitive sport played out in a great atmosphere. Well done to all who took part. The rankings after the first round are;

You can view the full result sheet here: Qualification Table 2019

Lure angling is one of Europe’s top angling sports and the NCFFI present teams in two world championships in this disciple annually. Lure angling is a top sport in Europe and its popularity is fast growing here in Ireland. The sport is clean and fair with fish welfare paramount. In competition we measure all fish, take a quick snap and return the fish directly to the water unharmed and alive.

If you would like to see what its all about, why not join the team for Round 2 on Lough Ree 17th & 18th of August.

The National Coarse Fishing Federation of Ireland, NCFFI has been representing coarse angling in Ireland since 1962, when the federation was formed by a group of angling clubs who foresaw the need for governance and a presence on the international match scene.

Coarse angling in Ireland is closely linked to tourism due to the fine selection of natural venues from the North to the South of the island utilised by anglers from home and overseas. Domestic championships have as a result always been open to the visiting angler and the festivals run by our clubs continue to attract large numbers from overseas.  For details of future events please visit www.ncffi.ie