It has been a mixed bag weather-wise this past week, with the eastern half of the country remaining largely dry with good periods of warmth and almost 40 hours of sunshine. Out west, it was a different story as duller, colder and wetter weather prevailed, with less than 15 hours of sunshine for the week recorded in Belmullet.

Unfortunately, the 5km travel restrictions continue to hamper most of our fishing efforts, and we are really down to slim pickings in this week’s Angling Update, with trout anglers providing the bulk of the action. No doubt, many of us were tuning in to An Taoiseach yesterday in anticipation of broadening our horizons. But it looks like we are in for the long game as we only have a slight lifting of restrictions, allowing travel within county bounds or up to 20km from April 12th. Details of what this means for anglers are available here.

Young angler Joey Pyke is lucky enough to have some fishable water within 5km of his home as he ventured out with his dad Kenneth on a mission to catch his first ever trout. Fishing a small river near Tullamore, Joey didn’t disappoint and managed to land a fine brown trout, which, as the photo shows, he was pretty pleased about.

Meanwhile, on the Kings River, the trout were also active for Dan O’Neill, making the time spent at the tying bench worthwhile. Dan spent a few hours at the vice knocking out some extra weighted nymphs, which proved productive, particularly an olive version with a bit of flash in the tail. Fish were hard to the bottom, so a bit of extra weight was needed in the nymphs to get down to them, but he managed a decent bag of small trout with a couple of bigger ones thrown into the mix.

But the trout action wasn’t all confined to the depths last week as we have a report in of a nice bit of dry fly fishing on the River Boyne. Mark Watson from Trim & Athboy Angling Club ventured out on one of the colder days recently but was delighted to find a few trout taking flies off the surface, and he managed to get himself a nice brace. 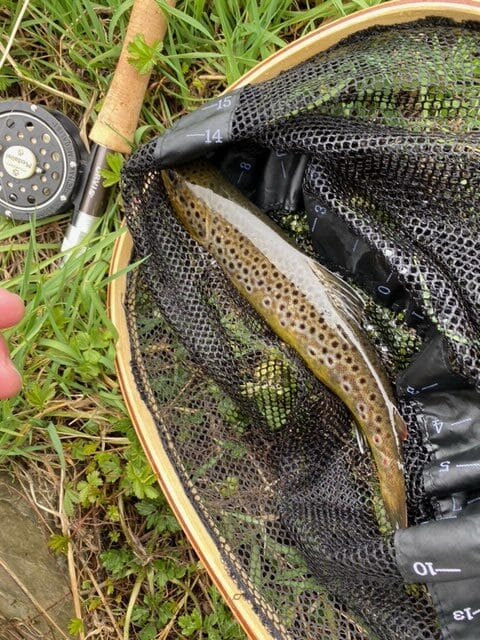 Moving from river to lake, we have reports that the duckfly hatch has been in full swing on the western lakes over the past week and most anglers that were able to get out managed some decent fishing. Poor weather over the weekend made it difficult for local anglers to get out on Corrib, but there were some nice catches later in the week, including a cracking 6lb trout for Cian Hughes while fishing with his dad Cathal. Cathal is himself no stranger to our angling updates, but more often with a pole in his hands than a fly rod, and it’s rare to see him coming second best…

Marcin Kantor is back this week with loads of tips on how to catch that most elusive of fish: a big perch. Most of us will have caught tons of small perch over the years, but it’s certainly one of the trickier species when it comes to catching the bigger fish. Luckily Marcin gives away a wealth of tips in his video, and hopefully, we’ll see a few more big perch showing up in future angling updates as a result.

Vincent Appleby has his usual report on the fishing down on Lough Currane, where wild weather and winds lead to tough conditions for anglers and no fish landed. Anglers faced similar wintry conditions on the Moy but at least had a couple of fish to show for their efforts, including a first fish of the year from East Mayo waters.

For anyone interested in ‘angling politics’, there was some good news during the week with the unveiling of the makeup of the Angling Consultative Council of Ireland (ACCI). This council has been set up to ensure anglers have a voice on future developments in angling through the participation of their federations/associations in the Council. There are currently 8 federations/associations signed up, with two more hoping to come on board in the near future.

It looks like a decent start to the Easter weekend with the weather remaining dry and pleasant on Friday and Saturday. There is a change afoot on Sunday though as much cooler weather will spread from the north-west on Sunday morning bringing wind, rain and possibly sleet. This weather system will dominate the early part of next week, with the worst of the weather being in the northern half of the country.