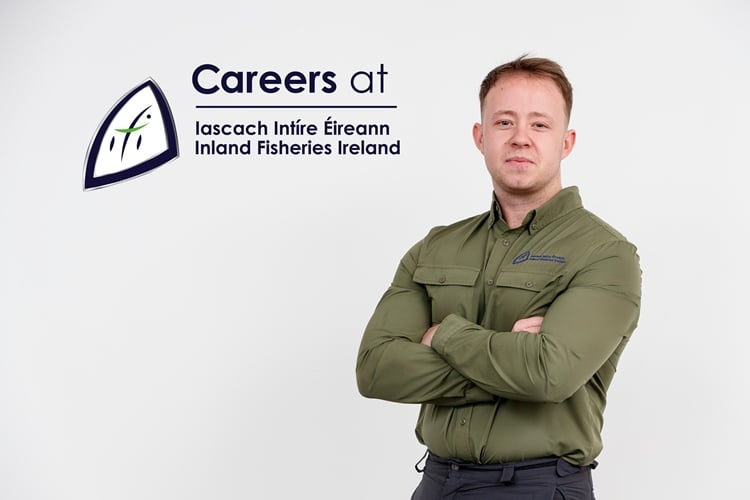 What does a typical day in the life of a Fishery Officer look like?

First thing in the morning the whole team meet at the base, and we’d split up into our pool vehicles before heading out on patrol usually. Patrols could vary between coastal patrols, river patrols, and estuary patrols.

Did you always want to be a Fishery Officer and what persuaded you to become one?

Ten years ago, I got some work experience with Inland Fisheries Ireland when I was in transition year. It was with an Assistant Fisheries Inspector, Des Chew, who co-ordinated the Dublin Angling Initiative. I went and did my work experience there for a week or two or whatever it was and following that it just kind of helped me go forward and choose my college choice. I studied environmental science and following on immediately after college I went straight into Inland Fisheries Ireland as a seasonal fishery officer.

When did you decide you wanted to be a fishery officer and how did you get started?

I’ve been fishing myself since I was a child, I was introduced to angling through my father and my grandfather. At a young age I met Fisheries Officers across the different lakes when we would be going fishing. As a child, that looked like a great job that you could work at something where you could also be surrounded by your hobby.  That was a huge influence to my choice of career.

What is your favourite thing about the job?

I think my favourite thing about the job is probably the fact that I get to work outdoors. Obviously in Ireland we get a mixed bag of weather but regardless it’s nice to be outdoors and be out among nature. There’s also a huge amount of variation in this role specifically and I suppose where I am in the Dublin district, we have the benefit of the role including urban and not so urban activities too. We get to do a wide range of things either it be protection or the actual development side of things like electro fishing and surveys so no two days are the same.

What is the most challenging thing about the job?

The most challenging thing is probably dealing with some of our stakeholders on a day to day basis. Sometimes you have to deal with someone who is committing an offence so the reaction that you receive is often not the nicest. You have to take that on board and deal with it in the best way possible at that time. The biggest challenge is dealing with the people who basically don’t want to have legislation enforced on them.

What do you think are the most important skills needed for this position?

I think it’s really important to have a good background and knowledge of angling as it definitely helps in building a rapport with anglers which is a huge help. I think you need to have a level headedness, especially when you are dealing with a heated situation. You have to be able to talk down situations rather than escalate them.

Another good skill to have would be communications skills because that’s essentially what you’re doing. Our biggest stakeholder in this role is anglers and that’s who you’re meeting on a day to day basis and the people you’re communicating to so good communication is essential.

What in your opinion is the biggest challenge facing the fisheries resource?

I suppose we have lots of different challenges now, climate change is a huge one and I think it’s noted by Inland Fisheries Ireland constantly. Having people adhere to the legislation that is out there and to understand that everything we do in our lives has an effect on our environment.

Water quality and pollution especially in the fisheries resource is a challenge and obviously there’s a huge decline in salmon. We see it here on the east coast but also all over the country. Inland Fisheries Ireland has highlighted a range of factors contributing to the decline in salmon numbers and now we are trying to implement different research programmes in Ireland to monitor and help engage production.

Who do you work with in doing your job?

I work within a team of Fisheries Officers and we also have our Assistant Inspector and Inspector, who would be over us as our line managers. Outside the organisation, I could be working with people on development projects that so the stakeholders could include construction workers, members of the public, anglers or it could be other government agencies such as the OPW or ESB.

What is the most interesting thing you have discovered or seen in your job?

I suppose species that you don’t get to see as often just as an angler that’s walks a river, when you’re in there and you’re getting to see all the various different species in the river which a lot of people don’t actually get to see.

What are you most proud of in your working life?

I’m most proud of getting out of college at the age I got out at to be able to get into what I imagine to be my long term career so early..

What do you do in your spare time to unwind?

Angling is my background so fishing and sports – I still play football and stuff like that.

What would you say to someone thinking about a career in fisheries?

If you have an interest in the outdoors and angling in general and if you’re comfortable working unsocial hours, I think it’s something you should definitely consider. It’s a fantastic job and there are not many jobs around like it. It’s very fulfilling.

In the morning you could be asked to go out and do a salvage operation, do a fish removal to take fish out of a river for construction works. You could be out doing an hour or two of protection and get a call of an incident somewhere so you’d have to go and deal with that. There’s always change, things are always different and it is endless because there’s just so much variety between electro fishing and kayak and rib patrols. The job also gives us an opportunity to support Education and Outreach work. We do environmental talks and help support the education programme Something Fishy. We take kids out and teach them fishing. You could be with a group of kids over the course of six to eight weeks and you can see them progress from not caring to catching their first fish and they get that kind of excitement about it and you see them progress. That I suppose is really rewarding and a really positive part of the job.

Inland Fisheries Ireland are recruiting for Seasonal Fisheries Officers, to find out more about the roles and how to apply, visit www.fisheriesireland.ie/careers .