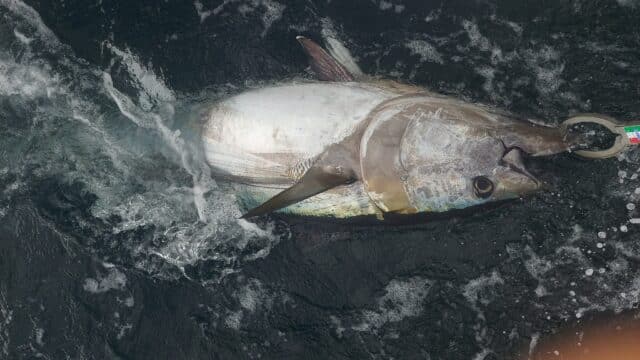 A number of bluefin boats based in the northwest enjoyed another great week of tuna action.

Adrian Molloy of tuna.ie reported five bluefin tuna to the boat today (Thursday 9th Sept.). Earlier in the week conditions were a little tougher but tuna also showed up in good numbers.

Killybegs Fishing Trips also had a mad day at the bluefin tuna with a total of four hook-ups. One fish of 90 inches and about 435 lbs. was caught, tagged and safely released.

It has also been a busy time for TunaMick with four groups of customers and the Marine Institute managing 28 fine fish, of a wide range of sizes, to the boat. The fish measured from 180cm to 245cm. The 245cm fish was every bit of 600 lbs. and strong.

A little further south fishing out of Mullaghmore, Declan Kilgannon, skipper of Kiwi Girl, also reported great tuna action during the past week.