Our principal worry is the accidental importation of the parasite Gyrodactylus salaris into Ireland. This parasite infects the skin and fins of salmon, trout and other fish in freshwater. It is less than half a millimetre in size. It is barely visible to the naked eye but may kill or cause serious damage to juvenile Atlantic salmon. 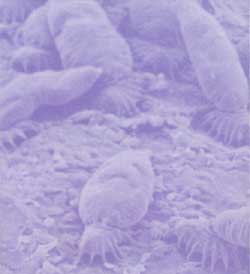 All anglers, and those involved in the aquaculture industry, should be on their guard, particularly foreign anglers coming to fish in Ireland or Irish anglers returning from countries where the parasite is now endemic (see map).

Where does it come from?

Gyrodactylus salaris occurs naturally in the Baltic rivers of Finland and Russia (possibly also eastern Sweden). The native fish of these rivers, including Baltic salmon, are tolerant of the parasite and normally the infection causes no harm. However, Atlantic salmon in areas where the parasite does not naturally occur have little or no tolerance of it. Some years ago, Gyrodactylus salaris was accidentally transferred for the first time to some rivers of the west coast of Sweden, to Norway and more recently to some of the rivers in northern Finland and northern Russia. The parasite has also been recorded from Spain, Portugal, France, Germany, and Denmark. 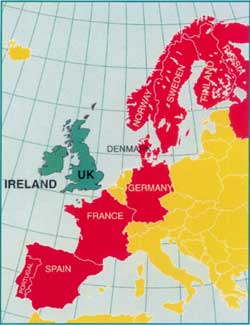 Why should I worry?

The effects of the disease are so serious that salmon stocks have now been lost completely from more than 20 Norwegian rivers, with the particular races of salmon in the affected rivers being lost forever. Gyrodactylus salaris does not occur in Irish rivers but experiments have shown that Irish salmon, like those of Norway, are killed by the parasite. It is therefore essential that the parasite is not introduced into Irish rivers.

Can it be destroyed?

To eliminate Gyrodactylus salaris from affected rivers, all types of fish capable of harbouring the parasite must be removed, so restoration of salmon stocks in affected rivers has involved poisoning whole catchments. Such remedial work is therefore destructive, difficult, very expensive, likely to take many years and may not be successful.

Is it a notifiable disease?

Gyrodactylus salaris is a listed notifiable disease and legislation is in place preventing the transfer of live fish capable of carrying the parasite to Irish waters. This has now been supplemented by EU legislation, which recognises the special status of Ireland and Great Britain being proven free of the parasite.

How could it get to ireland if there is no transfer of fish?

The parasite is very hardy and may be inadvertently introduced by anglers or fishfarmers. It is capable of’ surviving for several days in damp conditions such as, plastic bags, wet angling equipment (e.g. waders, landing nets, lines, bags) and the wet surface of dead fish. As the parasite has a direct life cycle and reproduces very quickly, it is possible that even a single specimen imported by accident to a reviously unaffected river would be capable of starting an epidemic in a very short time.

What other parasite/disease risks exist?

Apart from Gydrodactylus salaris there are a range of viral fish diseases endemic in Europe which we cannot afford to import into Ireland. These include Infectious Salmon Anaemia (ISA), Viral Haemorrhagic Septicaemia (VHS), Infectious Heamotopoietic Necrosis (IHN) and Enteritic Redmouth disease.

Irish anglers returning from fishing in European: countries or foreign anglers coming to Ireland to fish should take special steps to ensure that their equipmed is not contaminated by parasites or diseases by taking the precautions listed below.

All fishing equipment should be thoroughly cleaned and, then treated to kill any parasites by one of the following:

Chemical solutions which have been used successfully include Virkon (1%), Wescodyne sodium chloride (3%), sodium hydroxide (0.2%). It is recommended that all equipment so treated should be accompanied by a valid certificate from the rele vant fish health regulatory authority in the country of origin or at the point of entry into Ireland.