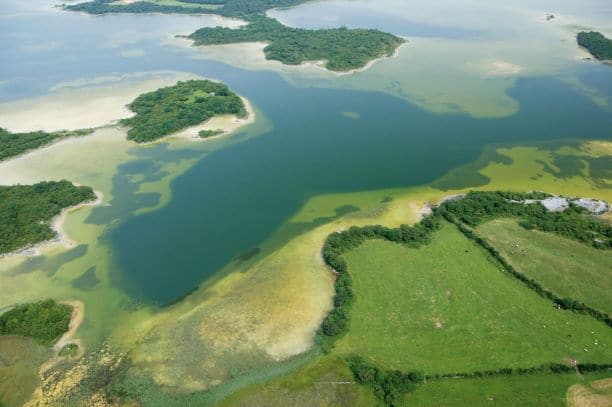 Lough Carra is a rich limestone lake located in Co Mayo in the west of Ireland. It covers an area of approximately 1,620ha and is a relatively shallow lake reaching depths of only 20m. It is renowned for the quality of its brown trout fishing and good fishing can be had in practically all areas of the lake. Carra is a very attractive fishery where the trout can be very silvery in colour probably due to the Loughs water being gin clear. The average size of trout is around a pound and a half but bigger fish are a distinct possibility. Notable fish taken on Carra include a lovely 3.9kg trout and the lake record stands at over 5.9kg. Both of these fantastic fish were caught by anglers dapping Mayfly.

Angling on Lough Carra is best from the end of April. Hatches of duckfly can occur from late March to early May and rises of trout take place when hatches are good. The main hatches of olives start from the middle of April and the mayfly hatch can start as early as Late April to early May with the best of the hatch generally taking place in the middle of the month. Hatches can of course be affected by weather and water temperatures. Spent gnat fishing can be good during the day but generally the best fishing is to be had into the evening under the right conditions. Hatches of sedges start in May and continue throughout the rest of the season. Carra can be well worth a visit in July when fishing is difficult on some of the larger lakes. Angling on Lough Carra is particularly good during the month of July because of the small numbers of perch fry and excellent hatches of sedges.

Wet fly fishing is by far the most popular method used by anglers and dapping natural flies such as the mayfly and daddy long legs and the grasshopper, is also widely used. Dry fly can also take lots of fish during the daytime but larger fish are generally taken during the evening rise. During August and September, lake olives, murroughs and small sedges are all plentiful and there is some great fishing to be had at this time of the year.

Some notable drifts on Lough Carra

At the southern end of the lake near Derraun Point there is deep water reaching circa 13m in depth. With southerly and south westerly winds excellent fishing is to be had drifting northwards from Derraun Point to Moynish Point. In westerly and north westerly winds the drift from Moynish Point to Otter Island or Carrigeenagat Island is very good. The area north of Moynish Point to Lynch’s Point is an area of shallow water with extensive reed beds. The is good dry fly and wet fly fishing in the open water between Lakeview Island and Cloonee Islands.

West of Lynch’s Point and extending to Otter Point is another shallow area of reed beds. North of Lynch’s Point at the Twin Islands the lake reaches a depth of 16.5m.The deeper areas are of such a limited extent that the angler need not be unduly concerned about them. When fly life is abundant, particularly at Mayfly time, fish can be caught in the deep just as readily as in the shallower parts of the lake.

East of the Otter Rocks and around Doonbeg Islands is a particularly good area for both dry fly and wet fly angling at all times of the season.

Brownstown Bay is very shallow and does not offer much in the way of trout angling. This shallow water extends northwards between Bush Island and the eastern shore.

The northern shore east of Twin Islands is predominantly shallow with fairly widespread reed beds. The open water between Twin Islands and Castle Island averages 5m in depth and is a very productive area.

Just south of Castle Hag there is deep water (16.5m) but in a western wind the drift eastwards along the edge of this deep can be very worthwhile. Reeds are fairly plentiful in Cloondaver Bay but with suitable wind conditions excellent sedge fishing is to be had. In fact, where the reeds occur and wind conditions allow, the angler should try casting his flies as close as possible to the reeds.

Annie’s Shore is fishable in a north or south wind and the west shore of Connor’s
Island has some of the best fishing on the lake.

From Otter Point to Kilkeeran the lake is very shallow. In the summer months the depth of water can be as low as .5m. There is a navigable channel and anglers should have no problem in gaining access to this part of the lake. Anglers using a long shaft outboard engine are advised to proceed through the shallows with caution.

From Kilkeeran the lake extends northwards into a large expanse of open water. This open water runs westwards to Kilfaul. The middle portion of this part of the lake is characterised by deep water to 13.5m. The deepest part of the lake is at the Black Hole where there is a depth of circa 20m. A south wind gives the ideal conditions for fishing this part of Lough Carra. The angler can choose between the east shore and the west shore. In south westerly wind conditions the drift from Kilkeeran graveyard to Kiln Island and Ballincally Islands can be very rewarding.

Heneghan’s Bay is shallow and reeds are fairly widespread. In a northwest wind the angler is advised to try the drift from Kilfaul to Deerpark. Heneghan’s Bay can also be fished in a
southerly wind. The best results are obtained by fishing along the west shore close to the reeds.

The Narrows at Church Island lead northwards to the deep water. The area along the East shore reaches 20m. Good angling can be had along the west shoreline and along a drift from Church Island to Castleburke. There is deep water in Quinn’s Bay and the entire bay has good trout. Westerly winds are ideal but either south-west or north-west winds will afford the angler plenty of opportunity to test his skill.

Sometimes in August, when the weather is particularly fine and warm large numbers of red ant can take to the wing. When these insects land on the water in their thousands, the trout feed voraciously on them. When this happens nature provides the dry fly fisherman with an unrivalled, rare and unique opportunity to practice his skill.

Nearest Towns: The nearest towns and villages are Ballinrobe, Castlebar and Partry

Licence and Permit Requirements
Brown Trout fishing is free on Lough Carra and no licence or permit is required to fish for brown trout. There are a number of regulations governing the fishing of waters in the Corrib catchment and full details can be found at www.fishinginireland.info/trout/west.htm

Best Flies: Lough Carra is noted for the quality of its evening fishing in the summer months.

Angling Club/Association: Lough Carra Trout Anglers Association is based on the lake and welcomes members to join their Association. Fishing is free on Lough Carra.

Access
Public access to the lough is good and the chief access points are located at Brownstown, Moorehall and Castleburke. Access can also be obtained at a number of private access points with permission. Access does not imply a right of way and anglers should ensure that, they have the necessary permission to enter or cross private lands. Where possible, anglers should walk along the river bank or lake shore.

Country Code
Country Code: Anglers should ensure that gates are closed and that fences are not broken or damaged. Care should be taken with crops and livestock. Litter must not be discarded and no fires are allowed. Vehicles should be parked in designated areas and in such a manner that they do not cause obstruction.

Errors and Inaccuracies
Whilst every effort has been made to ensure that the information contained on this webpage is accurate, no responsibility will be accepted by Inland Fisheries Ireland for any errors or inaccuracies contained herein.