18 July: I had a productive time on the River Barrow yesterday evening. I started out at 5pm on the boat, anchoring to a nice vantage point so we could watch for activity both up and down stream. After throwing in some tennis ball sized balls of groundbait it wasn’t long before the tip of my waggler float dipped below the surface. An average sized Dace was the first capture, followed by many more and one palm sized roach. The swim then went dead and with no bites after several runs through it,my friend Eoin, who accompanied me on the trip, took pleasure in finding the culprit who of course was a beautiful well conditioned jack pike. 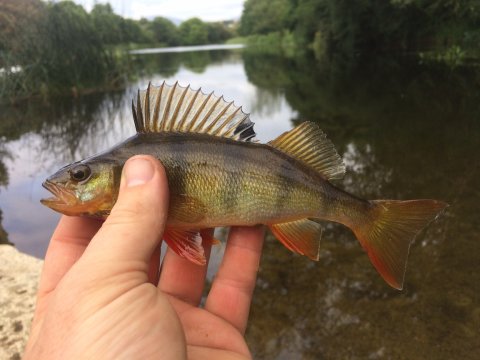 After the pike was released back to the river we decided to go slightly further downstream to try our luck. Again put in some groundbait. First on the scene were the usual suspects; Dace, followed by some perch that were in a location I hadn’t caught them in before. Swarms of sedges clouded the river and enticed some aggressive hits from some brown trout which had been quite shy throughout the evening.

Moving to our final location we were fishing for 15mins when an otter stuck his head up and looked at us in a manner that could only suggest we were intruding on his fishing spot. He eventually ducked under and left a  trail of bubbles in the direction he was traveling in. To end our evening we had a further 2 pike, 1 lost just at the edge of the boat and then a beautiful little pike who took a bait nearly bigger than him/her.

Throughout the evening we saw one salmon show which is quite unusual as I usually see several salmon lunging around ,possibly water temp to high for them at the moment,