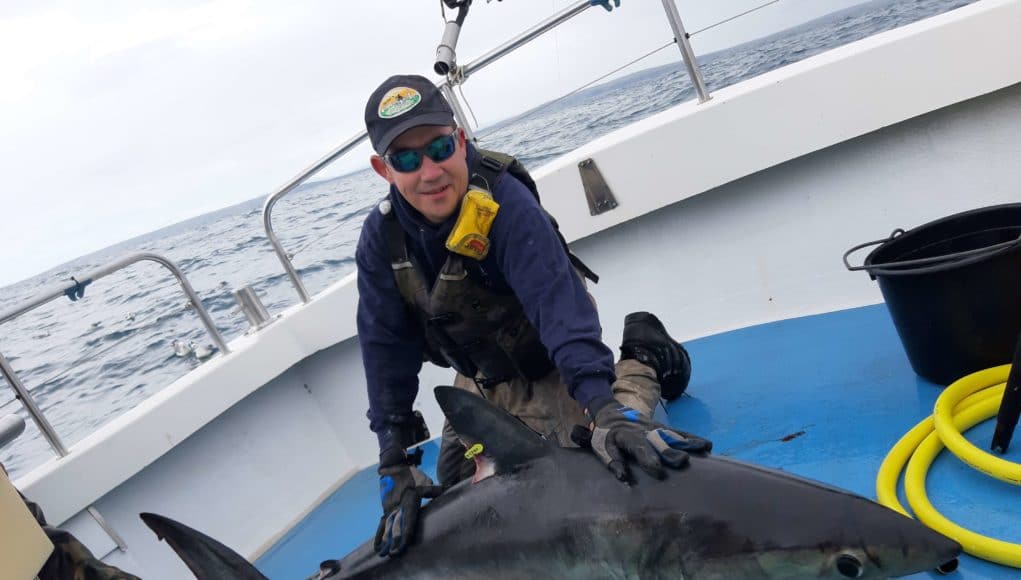 We’ve had some fantastic sharking recently, especially for porbeagles. We have had 10 beagles to the boat in the last 2 weeks with at least another ten or more being lost or dropped. It has been fantastic fishing and a brilliant sign for the future of angling for these magnificent species. All fish were handled with great care and released very carefully.

We had 4 beagles to the boat on our first trip this year. And the day after we managed another with 3 blue shark as well.

But last Sunday was a red letter day for me. We broke the boats record twice in one day. Firstly we had 5 beagles to the boat (our previous best was 4). Secondly Tommy McGee managed not only his first shark but the heaviest porbeagle we have gotten on the Hussy.

John Harrington managed to get his first porbeagle in just 5 five minutes of getting to the mark, a very happy man after 3 years of targeting them. Delighted to get him his first one.

Great fishing with lots of action we had 3 blues that day as well . So in total; 5 porbeagles with a few more dropped and 3 blues. What a day!

A regular day is between 9am- 6pm from either Rossaveal, Spiddal or Galway depending on species being sought after. Fishing on the inshore reefs for pollack, cod, ling, wrasse, conger eel and mackerel can be reached in 10 minutes from departure, while our offshore reef marks are within 45 minutes of departure. Our ground fishing for tope, spurdog, ray, bullhuss, turbot, plaice and the giant common skate can all be reached within the hour which ensures the most amount of time is spent fishing.
The shark season usually starts at the end of June and runs into late October, this is the ultimate angling adrenaline rush with these hard fighting blue and porbeagle sharks all being tagged and released safely.
Package deals available