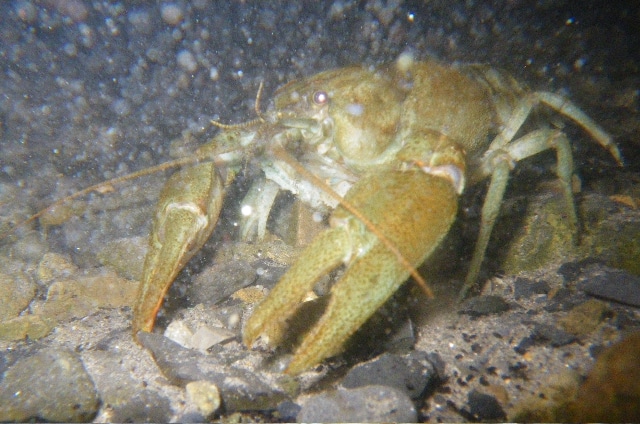 In response to a confirmed outbreak of Crayfish Plague in the River Nore, biosecurity measures are needed to help prevent its spread.

Crayfish Plague is a disease that kills our native White-clawed Crayfish.  All crayfish that become infected will die. Crayfish Plague is easily transmitted in water or via contaminated equipment (for example on canoes, waders or nets).

Ireland holds the largest population of the White-clawed Crayfish that remains in Europe.

Help Protect our Native Crayfish from this Disease

All water users are asked to take all reasonable precautions to prevent the spread of this disease to other rivers. Please make sure to clean, disinfect and dry your gear thoroughly (tackle, boots, waders, nets etc) before moving to another water.

Anyone using the river is being urged to observe the Check, Clean and Dry protocol. All wet gear should be checked for any silt or mud, plant material or animals. It then should be cleaned and finally dried. Disinfectant or hot water (over 60⁰C) should be used to clean all equipment followed by a 24hr drying period. This should be adopted as standard practice in all freshwaters. Drying is especially important, including removing of any water from inside a boat and disposing of it on grass. A drying period of at least 24 hours is needed to ensure that a boat is clear of infectious organism.

People are also asked to alert the authorities of any mass mortality of crayfish or sightings of unusual crayfish that might be non-native species (e.g. crayfish with red claws, large size).

The NPWS have recently confirmed the presence of non native crayfish in Irish waters. Your vigilance is required.

Members of the public who suspect they have seen a non-native species of crayfish are asked to take a picture of it showing the underside of the claws and submit this through  http://invasivespeciesireland.com/alien-watch/ or direct to Colette Flynn (email: coflynn@biodiversityireland.ie) Phone: 051 306248

The advice is that strict biosecurity is observed when working in all these catchments. The highest level of risk is moving equipment that has been used in an affected area to an unaffected catchment. The Crayfish Plague disease organism (a water-mould Aphanomyces astaci) is microscopic and invisible to the naked eye and is only viable in water. It is completely harmless to people, pets, livestock and all other freshwater organisms. The presumption should be made that any equipment which becomes wet and has been used in an affected catchment will be contaminated and there is a potential for spreading the disease to new sites.