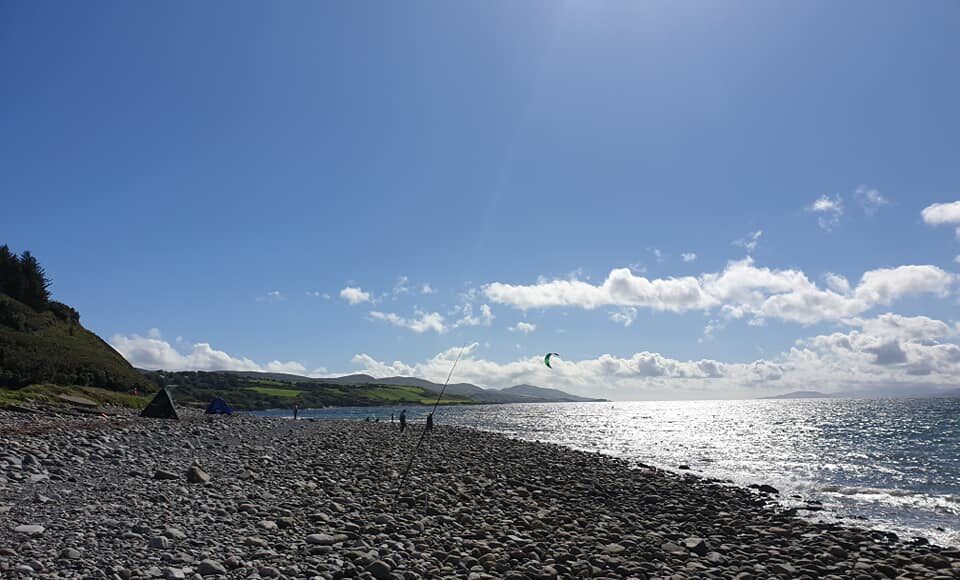 25 July: The Westies were back in action on Saturday last at the infamous Bantry Airfield. 16 anglers made the journey to the absolute marmite of venues on our fixtures list. You either love Bantry or hate the place with a passion, there is no middle ground. The weather was a mixed bag with bright skies for most of the evening but a dirty onshore wind gusting to 25/30mph from the West, pushing heavy weed through the venue from the word go.

Tom Collins on peg 12 found the fish from the first few minutes with a lovely little thornback ray. JP on peg 10 also had his card marked early enough finding the dogfish. Balls of long stringy weed was tormenting everyone along the beach with a few snap offs for good measure. The fishing was slow by anyone’s standards with Tom and JP leading the pack all the way through.

Sully on peg 8, who took a wrong turn on the way to the comp and ended up taking the scenic route around the Sheeps Head only to arrive late, got straight down to business and found a dog and his very first ray.

A late burst by Sod on peg 2 got him in the across the line and into the prizes with 4 fish.

As the whistle went the man of the day was Tom Collins with 7 fish, a massive well done to Tom, a well deserved win in tough conditions.

A total of 27 fish were caught and catches were made up of Thornback Ray, Dogfish, Whiting, Grey Gurnard, Scad and Conger Eel.

The club was formed on march 19th 2009, in the small picturesque harbour town of  Kinsale County Cork. We’re an inclusive club, this can be seen in our membership profile; from anglers who are new to match fishing all the way up to members of the Irish World Shore Team 2010, two of which are in the club! The club holds circa 10 competitions per year, members are encouraged to practice a catch and release policy in the interests of conservation. Anybody wishing to join our club is always welcome, just use the contact us page and we will give prospective members full details.
Web: http://westcorkanddistrict.webs.com/
Facebook: https://www.facebook.com/pages/West-Cork-and-District-SAC/201776589958897