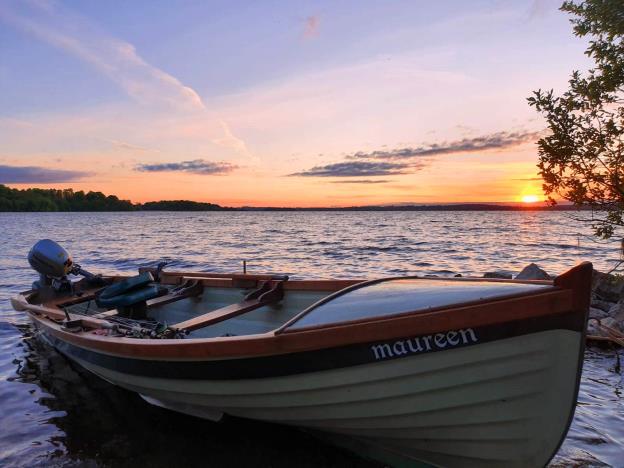 ‘Put backing on your line, even if you never use it. It helps you to dream’

Southerly winds and increasing temperatures stroked the lakes surface to produce large falls of spent and even larger trout heading and tailing to take them. Angling numbers increased signaling to any onlookers that the mayfly was ‘up’ on Lough Sheelin.

Duffer’s Fortnight – a name synonymous to easy pickings – is a myth because although the mayfly hatch does bring the big fish to the surface, it is certainly not easy fishing as such and there is still a certain amount of skill involved to successfully catch a mayfly trout here.

First of all, it often takes 2-3 days of hatching before the trout really turn on to the danica, and even though these insects are large and easy to spot, it’s doubtful a ‘chuck and duck’ effort will work, correct presentation is imperative and covering a rising fish without hesitation a necessity for success.

There is something very special about this time of year – the mayfly season, bring with it long days, increasing warmth and where every part of nature is bursting with life. There is a newness and freshness that is now, more than ever, necessary to replenish our world weary souls.

From a trout angler’s perspective, May is a truly magical time, made so by what feels like the sudden appearance of the mayfly.  As if out of the blue, suddenly there they are, freshly hatched duns sitting like little green sailing boats scattered out over the surface water, drying their wings before becoming airborne.

Ephemera danica, coming from the Latin word Ephemeral, or short-lived, is the largest up-winged species in Ireland.  Although the mayfly nymphs live two, occasionally three years on the bottom of the lake, once these are transformed into our very beautiful mayfly, one or two days of a life span is all that is allotted to this goddess of trout waters. They are doomed because they have lost their mouth parts and cannot eat. Their sole purpose is reproduction and then death. Their short life-span starts as an energetic green fly and as it ages its fragile wings and body darken.  Leaving the cover of the bushes it begins the mating ritual where thousands gather in an elaborate dance which can look like spirals of smoke rising up in the air. After the female lays her eggs on the water she dies and it is this fall of spent along with agreeable weather conditions that can bring on a substantial rise of trout.

Mayflies can emerge at any time from April through to the autumn but the principal hatches on Sheelin are normally in late May and early June. The reason the name doesn’t coincide accurately with the month is because they were named before the Pope changed the calendar and at that time May was a couple of weeks later in the year.

Angling numbers increased dramatically on Sheelin as the week progressed, with some hefty trout being caught. The weather, as always, dictates how good or bad the fishing is here with  Friday’s and Saturday’s strong gusting south westerly winds somewhat putting a halt to the gallop of even the most enthusiastic angler. Despite these meteorological hiccups there were plenty of golden moments during the week, when gently warm breezes induced large falls of spent with considerable numbers of trout rising to the occasion. On Tuesday evening there were three falls of spent, each fall punctuated by showers of rain.  On Thursday our Sheelin mayfly put on a spell binding aerial dance close to Church Island, something akin to an extract from Tchaikovsky’s ‘Dance Of The Sugar Plum Fairy’ but despite this mesmerizing natural phenomenon, down came the rain and no spent went out.

Changing wind directions and speeds did add an element of challenge into the fishing.  I am reliably told that south east winds are best for dry fly fishing because these produce longer drifts whereas south west favour the wet fly anglers.

Lough Sheelin is an unpredictable stretch of water, there is really no definition of what constitutes a good or a bad fishing day and there are times when even the most unlikely weather can produce great fishing.  Sometimes it feels akin to a lottery.  Bear in mind that with the mayfly it takes some really bad weather to stop a hatch as the mayfly hatches are triggered by seasonal light rather than localised weather so with safety always in the forefront, tucking yourself into a sheltered bay or inlet can bring on some surprisingly good fishing.

The novice and inexperienced anglers are easy to spot on Lough Sheelin, they are the ones that restlessly move from place to place as if being continually on the move will increase their chances of piscatorial success. Fishing on this mercurial stretch of water demands patience and observation, some good advice would be to find a drift and stick with it, fish the edges, repeat and watch for that heart stopping pod of feeding fish and then strike.

148 trout were recorded for this week, with the heaviest trout weighing in at an impressive 8lbs 6ozs caught on the capturer’s own version of a Grey Wulff. Second heaviest fish was an 8 pounder caught on a Spent Gnat with six other fish being reported as tipping the scales at over 7lbs. Trout averaged 2½ to 4½lbs with a heavy scattering of 5 pounders in the mix.

Most fish were caught using a wide variety of spent gnat patterns. Spent Gnat fishing usually kicked off after 5pm and ended around 10.30pm.  During office hours mayfly nymphs and a selection of dry fly Mays did the business.

Although now is predominantly about the mayfly there are also plenty of other potential trout food out there – terrestrials, a variety of sedges (Welshman’s button, Long horned, Silver and Cinnamon), buzzer, alder flies and some caenis.

The best areas for fishing this week were predominantly down along the Western shore of the lake, Stony Island, at the back of Church Island, Merry Pt, Wilsons pt, Inchacup, Chambers Bay and from Kilnahard down to Crover, Crane Island,  Bog Bay, Sailors Garden and into Goreport, Lynch’s Pt, Derrysheridan and Derry Pt. 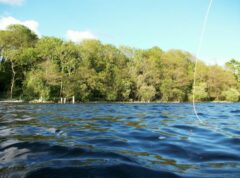