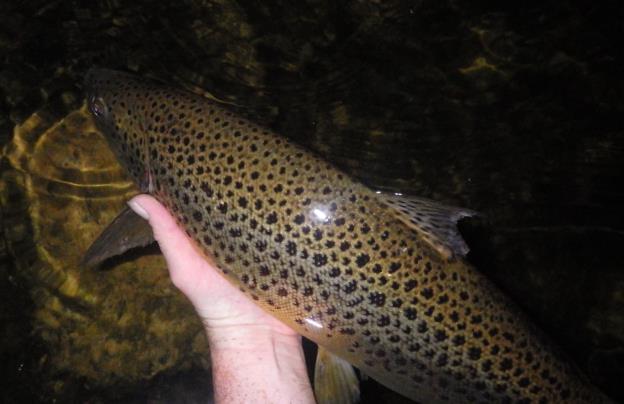 We are moving through the last month of summer and the weather this week has been once more dominated by heavy and in some cases persistent rainfall, reminding me of a very apt quote from Hal Roach – ‘You know it’s summer in Ireland when the rain gets warmer’ and true enough temperatures soared into the early twenties giving warm balmy fishing conditions.  Even though many of us have lived in Ireland our whole lives, we somehow think that this summer will be different – and then it rains, the quips about the Irish summers are never ending – ‘the Irish summer fell – on a Tuesday this year’ etc. etc…but rain only puts a halt to our angling gallop, the trout are largely unperturbed and carry on feeding.

It feels like August and the imminent approach of autumn is reflected in a slight change of shoreline colours and the mewing call of the buzzards who hang in the air over Sheelin.

This week was all about chasing piscatorial dreams shrouded in the evening shadows – trout surfacing for the dusk sedges of green peter and murrough. Many dry fly purists are uncomfortable fishing in the dark, some dismiss it as being similar to wet fly fishing in that you are casting out blind and not actually having the satisfaction of seeing the fish taking the fly.  It is a difficult time now as the only real surface action is more or less only happening during the unsocial hours of evening and at nightfall. ‘Normal people have no idea how beautiful the darkness is’ a seasoned sedge angler remarked to me this week but he left me pondering  on the word ‘normal’ rather than the subject of darkness.

Angling numbers this week were reflected by the meteorological conditions, dwindling to one or two boats on the really soggy nights and increasing to a maximum of a dozen or more at drier times.

This week was all about sedge fishing and in particular – Agrynpnia varia – the Green Peter.  There were some great lumps of trout caught on various dry fly imitations of this sedge with the peak times clocking in between 10 and 11.30 at night.  Sedge hatches varied from ‘patchy’ to ‘not too bad’ to ‘good enough’ depending on what area of the lake was being fished which was again dictated by wind direction.  All the bigger fish from 3 ½ lbs up to the top weight of 6 ½ were caught on dry fly whereas a respectable number of 1 – 2lb fish were caught on teams of wets.

Going through the week:

Bank holiday Monday was dry and sunny.  Anglers are reporting lots of small fish of 1 – 1½ lbs showing up around Inchacup, Rusheen and Derry pt. in particular.  There were some nice 3 ½ to almost 5 lb fish caught on small dry peter patterns from 10pm onwards.  Tuesday was humid and blustery with fresh to strong south westerly winds gusting across the lake.

Anglers reported plenty of fish on the move and some catches were recorded using wet fly patterns – Dabblers, Red Tailed Peters, Golden Olive Bumbles and also on some small emerger patterns like the Klinkhammers.  Night time fishing on the dries – small sedges and green peter patterns brought in some trout of over 3, 4 and one of 5lbs. The Southern end of the lake fished best on this particular night.

Wednesday was the pick of the fishing days with westerly winds falling to light in the clearing rain, temperatures stayed around 19 degrees and the evening shaped up for some good sedge fishing in the half light.  A beautiful solid trout of almost 5lbs and measuring in at 54cm was caught by James Casey on a small dry peter after 10pm.  A Royal Wulff and a small sedge or Klinkhammer were getting some action out in the middle of the lake but although these stimulated a rise it was difficult to get a take.

Thursday retained the high temperatures but got breezy with south westerly winds making fishing challenging, a few smaller 2lb fish were caught around Goreport on dry sedge patterns out in the open water.

Friday, August 7th was punctuated by one heavy shower and after that temperatures climbed into the 20’s and the southerly breezes slackened off to mirror calm conditions for the evening, fishing was slow both during the day and for the evening and although a number of boats were out, only a smattering of trout were recorded, heaviest at 3 ½ lbs on a Sedge Emerger.

The weekend sported tropical day time heats of 22 -23 degrees with bright sunshine, described as ‘pure torture’ by the anglers  and the trout stayed deep with no real evidence of their existence until the cool of the evening.  There were very poor and in some places, non-existent hatches of peter so the trout made only a small number of perfunctory surface visits and few catches were recorded for both of these days.

Peter sedge fishing depends on a new hatch every evening, if the fly doesn’t hatch, there is nothing for the trout to rise to.  The Peter fishing and all the exhilarating expectation that comes with it is ending, their season is winding up but hopefully they will persist in some places on  this lake for a week or two more to allow us to squeeze the last drop  out of this magical fishing.  Of course there are plenty of other small sedges that will continue to hatch when Agrynpnia varia has left the room and the trout will surface for a big enough hatch of these but it is that big meal in the form of Murrough and Peters that the heavier fish find hard to resist as they temporarily forgo the packed larder down in the lower regions to head for the surface.

32 trout were recorded for the week, interestingly all the day time, wet fly fish averaged around 1½ – 2½ lbs with few exceptions while the evening/dusk fishing on the dry sedges and emergers produced trout averaging 3½ – 6lbs, confirming the suspicion that the heavy weights do make the effort to surface for a well presented dry fly.  Presentation of course is important but if the fly isn’t acceptable to the fish, no presentation is good enough, so presentation is secondary and it is the fly and its design and footprint that are of paramount importance in dry fly fishing.  Having the right fly pattern in the right size and knowing exactly how to fish it are crucial when dry fly fishing the evening rise.

The Chocolate Drop Sedge is a great pattern to carry with you at this stage when the sedges are in full swing or as big a swing as you are going to get, weather permitting.  As well as having a delectable name the Chocolate Drop is designed to sit in the surface rather than on top of it which gives this fly a realistic profile which trout tend to take with more confidence.   One of the best methods to fish this fly is to twitch it across the surface of the water to imitate a struggling sedge but it can be pulled, skitted or just left to drift.

At this stage of the fishing season some areas of the lake have been over fished and the trout have become wary so for the evening sedge fishing it might require some trial and error to find a less frequented spot.  Popular areas for fishing are Corru, Goreport and Lynch’s point down into Bog Bay, also Chambers, Kilnahard, Wilson’s point and down along Holywell.  Some trout were caught in the middle of the lake but if anglers are focusing on the dry fly fishing there will never be a crazy rise in open water so a better plan is to try bays and inlets for the caddis hatches.

Some years ago when I first started to write the Sheelin angling report I used to get very caught up in all the gadgetry around trout fishing especially the flies and all those different and fancy names and colours but now I have learned that no amount of flashy fly design and gear can substitute for sound knowledge, on-the-water experience, analytical thinking and routinely practiced skills.  The most productive piece of fishing gear I have finally realised is not in a tackle or fly box, but rather, in your skull.  Your brain, filled with essential fishing knowledge, is the ultimate key to consistent success and this is why the best anglers are not those with the most (and most expensive) gear, but rather, the most knowledge.

When all is said and done, there are only so many places for fish to live and hide in any given body of water, only so many available things for a trout to eat, and only so many things they regularly love to eat.  Discover where and what those are, and you will find and catch fish or at least have the best chances of doing so.  This of course is not easy particularly on a temperamental lake like Lough Sheelin, it will require some diligent effort and plenty of experimentation, and even if you find the trout, you can’t always make them take your fly, no matter what.  Sometimes they are just not hungry or active and nothing you can do will ease their lockjaw but this is why it is called fishing and that it why it is so challenging, fun and a great source of educational adventure, if it was easy most of us quite simply would not bother.  The more you learn, and the more you solidify that knowledge with experience, the more successful you will be and is any classroom more beautiful than Lough Sheelin to be in?

A permit is required to fish Lough Sheelin. Buy your permit online at: permits.fishinginireland.info or from any of the permit distributors listed here.