The Feeder Club Championships took place last weekend on Lough Muckno. The event which also doubles up as a qualifier for the World Championships, saw ten teams of 5 take part, representing a mix of clubs and anglers from across the country.

The championships opened with a bang as Philip Jackson’s top match weight of 16kg from Yellow Island consisted of 175 fish and a bonus bream. Lurgan Coarse Angling Club’s BLUE team otherwise had 3rd’s in section putting them in second position against CM Lakelands Feeder Club’s Gold team, who were just 2 points ahead.

A solid performance from Lurgan saw off the two point lead of CM Lakelands Gold ending with a points tie leaving the latter runners-up 3kg behind on weight. A perfect 2 point score also saw Philip take the individual honours too.

CONGRATULATIONS to the winning Blue team of Johnny Mckinley, Jim McAllister, Philip Jackson, David Herron and Johnny Keith who take the title in the club’s 40th Anniversary Year! The club will now have the opportunity to represent Ireland at the FIPSed World Feeder Club Championships in Italy 2022. 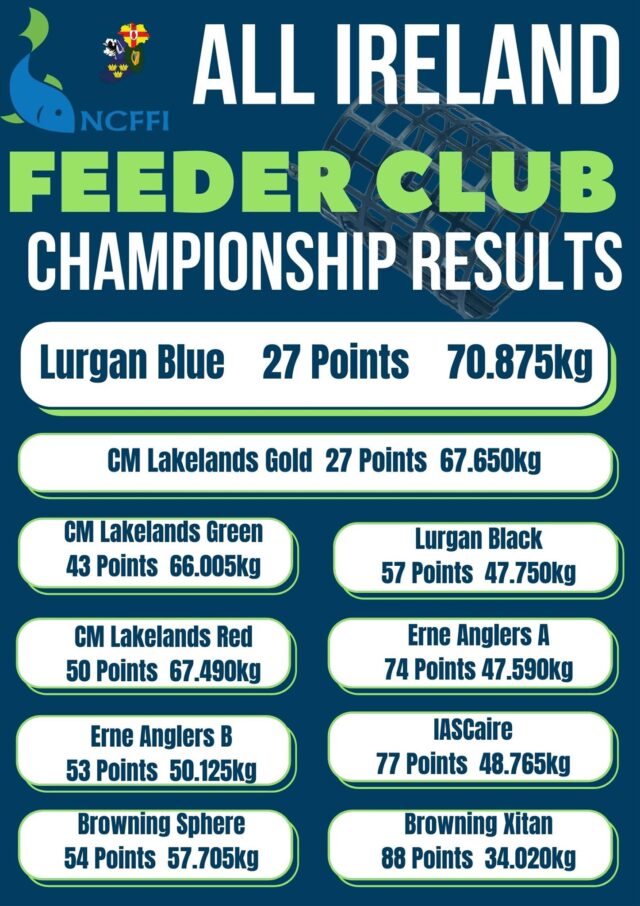 Reports courtesy of the National Coarse Fishing Federation of Ireland, NCFFI the National Governing body for coarse and predator fishing and casting sport as recognised by Sport Ireland and Sport NI. www.ncffi.ie