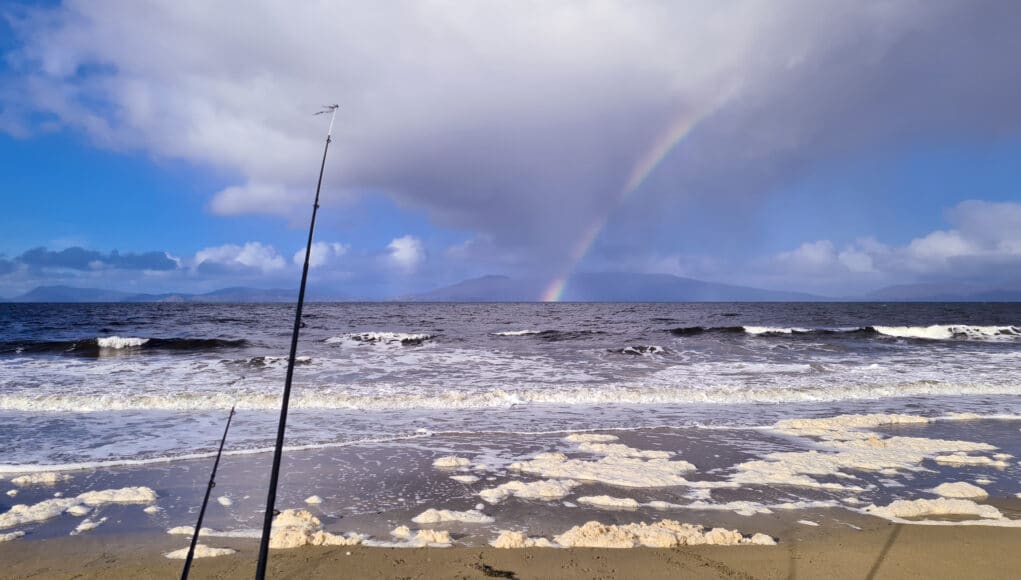 October drew to a close with wet and very windy weather on Halloween, ushering in cooler temperatures as November took the stage. Since the weekend, the weather has been bright and mostly dry, a lovely start to what is often a dreary month.

Most of our news this week concerns sea angling, with the game fishing season well over and high water levels on many rivers and lakes restricting freshwater angling. Many charter boats are still in the water, and late season can provide good sport, so why not check out our list of charter boats here to see about getting a day out.

Starting on the east coast, where skipper Kit Dunne reported great predator fishing. Spurdog, bull huss and a specimen tope were all caught on a recent trip. 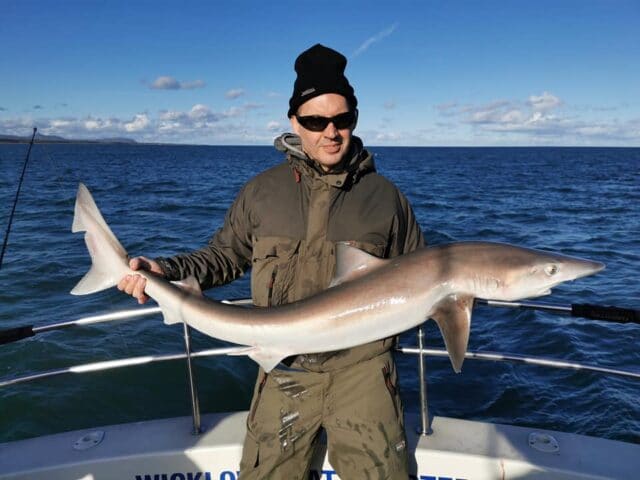 The tuna season draws to a close soon, but Adrian Molloy is still getting fish, including this 300lbs fish for his client Andy. 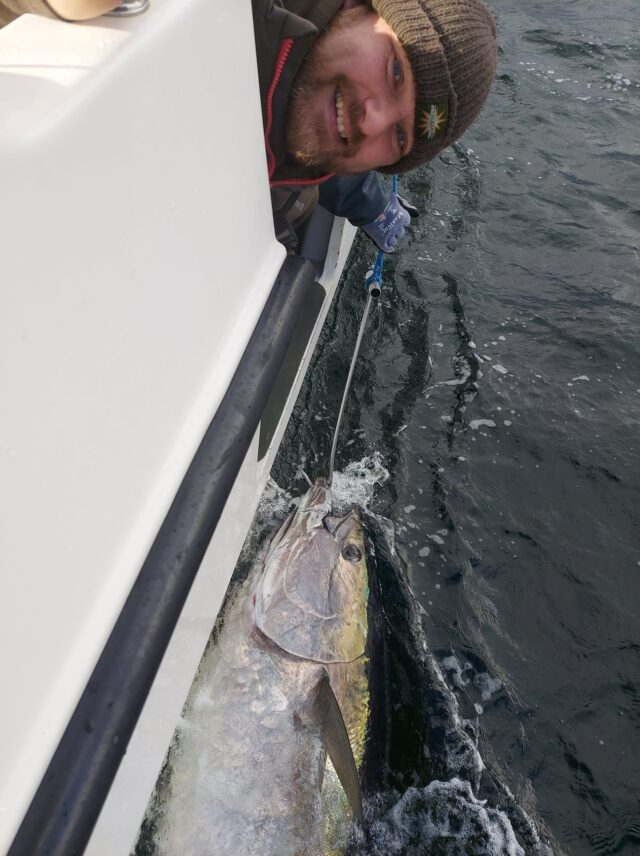 Shore anglers are still enjoying the bounty of lingering warm sea temperatures and fish feeding hard before winter. Club members in Killybegs were out chasing fish feeding on the big shoals of scad that were inshore. Pollack and decent conger were most welcome, but it was light line fishing for garfish that produced a new club record for John Burke – a fine catch! 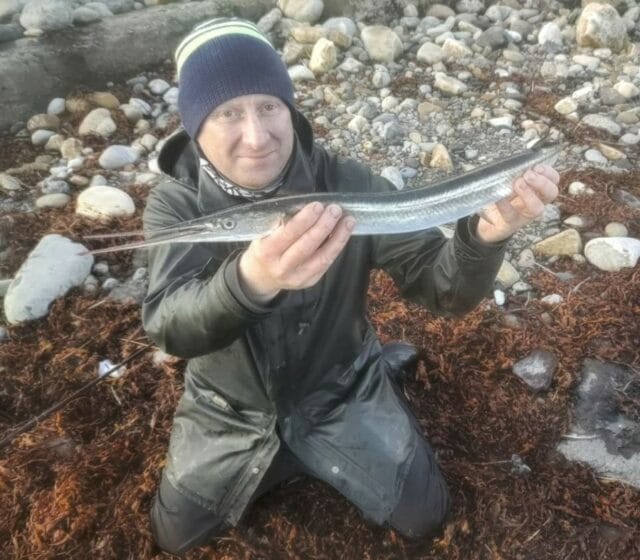 Get Your Skates On

Further north again, and it was a catch of a lifetime for Liam Mullan from Derry. Liam was fishing for ray off Ratghmullan Pier when he hooked and landed a Common Skate, a massive fish estimated at 90kgs! And without any doubt, our Catch of the Week. 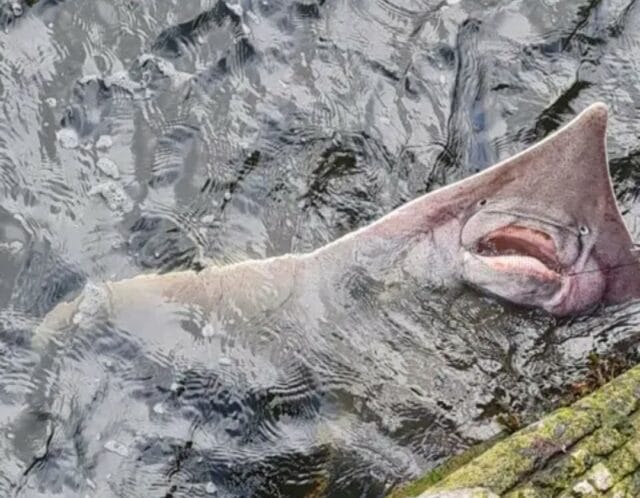 Pike in the margins

Back to freshwater, and a party of French anglers made light of heavy rain and rising floodwaters during their stay at Melview Lodge in Co. Longford. Fishing hard and soft lures, they followed the fish into the flooded margins as water levels rose and enjoyed tremendous sport.  Bodo Funke also reported great fishing for clients over the past few weeks, with pike to 111cm recorded. 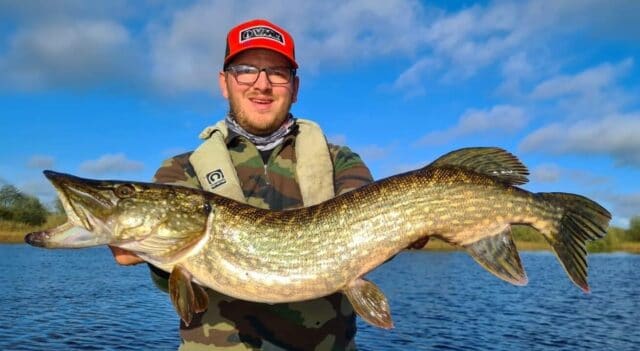 Perch are also a great little predator fish to target on light gear, and Alan Walsh made the most of a recent trip, landing over 100 fish from 3 fisheries. Top fishing Alan! 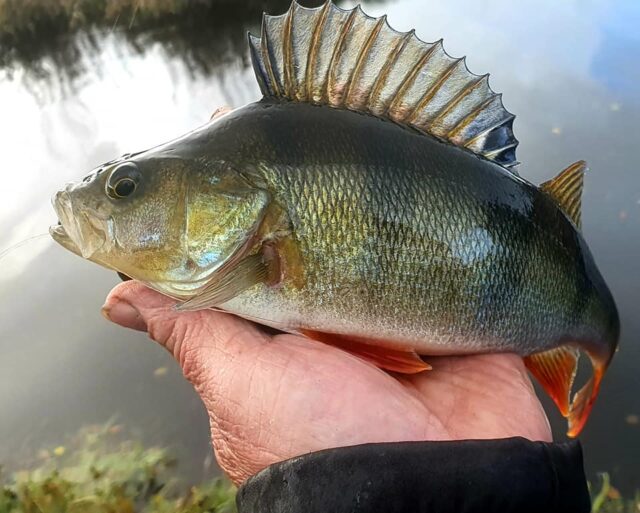 While You were Tying

While game anglers content themselves with tying flies and dreaming of next season, salmon and trout continue to make their way upstream on their spawning migration, with trout already spawning in many areas. After heavy rain, many weirs and waterfalls are good places for spotting salmon, in particular. Remember to keep a discreet distance and don’t disturb them.

Salmon will be starting to spawn in December, and when not migrating upstream, will conserve their energy, often staying together for safety. Again, they should be left alone and not disturbed. These fish were filmed at the hatchery in Cong, Co. Mayo.

Speaking of flytying, Peter Driver from Piscari Fly  is back with his Saturday night live flytying sessions. Tune in for great tips and some banter, with special guests always sure to appear. While the show is live, it is also recorded and available afterwards on Peter’s Youtube channel.

Our public consultation on Arctic charr is still open until November 16th – so don’t delay if you wish to have your say.

And on that note, a further reminder to salmon and sea trout anglers that logbooks must be returned now that the season is over.

And just for good measure, Inland Fisheries Ireland has launched a public consultation seeking anglers views on how to improve the Wild Salmon and Sea Trout Tagging Scheme.

Remember, remember, the 6th of November! Salmon Watch Ireland have announced details of their annual conference on November 6th (TOMORROW!), with the theme of the conference this year focusing on barriers to migration. This should be an interesting and informative session.

Generally cloudy today with patchy light rain and drizzle, mainly affecting the west and northwest. Some brighter spells too in parts of Leinster and Munster. Highest temperatures of 10 to 12 degrees, in light to moderate westerly breezes.

A windy day on Saturday. A band of rain will move southeastwards across the country with drier brighter conditions and a few showers following. Highs of 12 to 14 degrees in strong and gusty southwest winds, veering west to northwest and moderating away from northern coasts as the rain clears.

Sunday will be mainly dry with a mix of cloud and some sunny spells and just the chance of a stray coastal shower. Turning a little fresher again too with highs of 10 to 12 degrees in mostly moderate northwesterly winds, stronger for a time in the north and east.

Monday will become mild and mostly cloudy with some rain spreading across the country in freshening southerly winds. Rain turning heavier on Tuesday before spreading slowly eastwards over the country, but a clearance to sunshine and isolated showers with light winds by Wednesday, with Thursday also looking reasonably good.

If you’re heading to sea, don’t forget to check the tides.