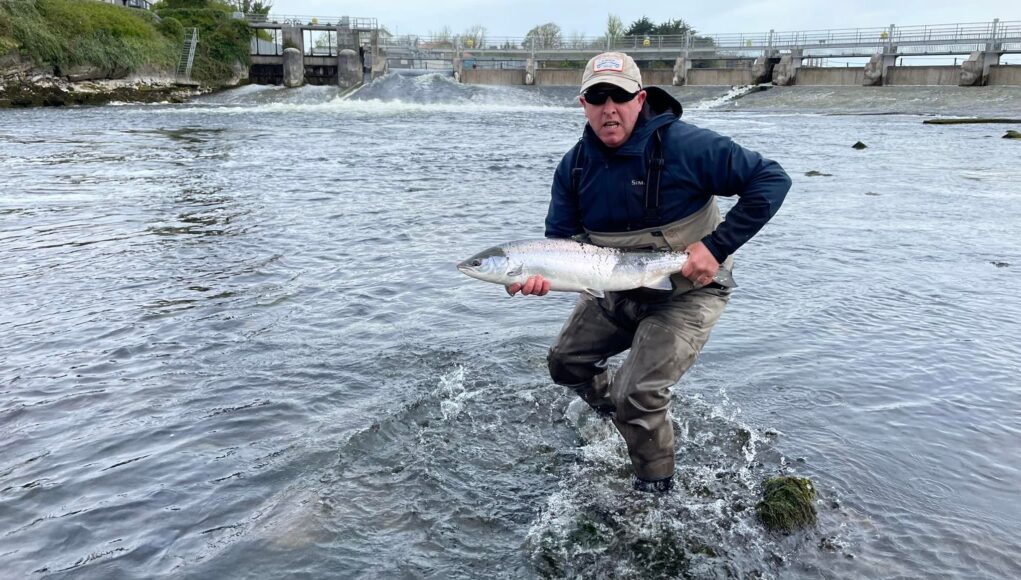 It has been a good April on the Galway Fishery, according to James Quinn. Water levels have been suitable for angling, and anglers have been enjoying good sport in the spring weather. The first fish was landed by local angler Fergal Cormican on March 23rd, and followed that up with 2 fish on April 5th, both on fly. One was 11.5lbs and the other 9lbs, one released. Michael Barry also had a 12lbs fish on the same day, also on fly.

On the 16th Paul Whelan (Waterford) released a 14lbs fish on fly. Eoin Warner also had an 11.5lbs fish on fly. Check out the lovely video of Paul’s fish going back safely.

On the 20th Sean O’Toole and John McCarthy had fish of 9lbs and 8.5lbs on shrimp. The following day Henry Cosgrove fished the fly and landed a 9.5lbs fish.

On the 29th John Ryan (Tipperary) landed a 9.5lbs fish on fly, and the same day Craig Ireland from Northern Ireland had a fine 16.5lbs salmon on shrimp.

Ovwr the period there were 25 fish landed for an average weight of 10.22lbs, with 16 of those fish coming to the fly, a great number no doubt due to the perfect water conditions allowing anglers to wade the river, not always possible in springtime!

To enquire about availability, contact the fishery at 091 562388 or email seamus.hartigan@fisheriesireland.ie