Lough Melvin is a beautiful unspoilt lough famous for the diversity and number of salmonids that inhabit it. The lough has salmon, char as well as gillaroo, ferox and sonaghan strains of trout.

The sonaghan is a sub species of brown trout that only occurs in Melvin. This little fish, although only growing to around 2½lb, puts up a great fight. 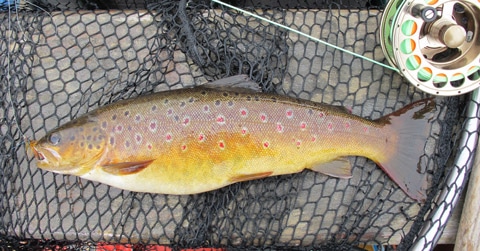 The gillaroo is a lovely golden coloured trout that grows a bit larger and is similar to the gillaroo found in loughs around the midlands.

The ferox is little fished for in Melvin although fish of up to 15lb are often caught by accident (rather than design) while trolling and sometimes on the fly. Salmon are caught right throughout the season. Spring fish can be caught all season, with grilse being caught from May onwards.

Trout fishing can be patchy early in the season, but Kinlough Bay can fish extremely well in March and April with the sonaghan concentrated in the top of the lough early in the year. The fish then start to spread down the lough and through the rest of the year productive areas include the sunken islands, Farell’s Bay, the shores along Inishmean Island and Church Island, Rossinver and long drifts down towards Garrison. The sonaghan however, can be caught anywhere in any depth of water (140ft in the middle!). Since their staple diet consists of mainly daphnia, the sonaghan occur where the daphnia are concentrated. The gillaroo are found close in to the rocky shores and around the sunken islands. Their staple diet is mainly the molluscs that live on these shores. A good wave is normally needed before the gillaroo will come to the fly.

The most popular early season flies for the trout (especially during the Duck fly hatch) are a Doobry, Teal and Black, Coachman, Bibbio & Hot orange, Black Pennell and a Connemara Black, though any black fly seems to work well especially if it has a touch of orange and/or white. A Sooty Olive, Fiery Brown, and Golden Olive also produce good results. From mid May the most popular patterns are the Bibbio, Green Peter, Goslings, Green Olive, green and yellow mayflies (dry & wet). From July onwards Green Peter, Bibbio, and Claret, Fiery Brown, Bumbles (especially Claret), Dabblers, Invicta and late in the season wet and dry Daddy’s.

The Southeastern quarter of the lough i.e. Rossinver Bay and the Roosky shore constitute the Rossinver fishery (see below for permit details). Rossinver Bay, which comprises the red buoy on the eastern side of Ross Point to the similar buoy at the Southern end of Roosky shore, is strictly fly only. The area inshore of the marker buoys from Ross point to the Border is fly only from the 15th May to the end of the season.

A permit is required for the Rossinver Fishery as listed below:

Permits are available from:

Salmon licences are available from

Clients from all over the world from England, Scotland, Wales, Germany, Usa and South Africa. Total C&R on Jackie’s boat while guiding.

Also does boat and engine hire on Lough Melvin.

Permit: A permit from the Garrison Anglers is required which costs £80 per season or £10 for a day salmon fishing permit,£10 per day for a day trout fishing permit. Juvenile permit £5 per season. These are available at Sean Maguire’s, Main Street, Garrison, Co. Fermanagh, Northern Ireland.
Tel: (048) 686 58194.

Lough Melvin Garrison Salmon Tags are issued on a Garrison Permit. Anglers are allowed to kill 2 salmon per year on the Garrison Waters of Lough Melvin. 2 tags per angler are issued annually. 3 salmon only can be killed between the 1st February and the 1st March.