We had been into Absolute Fishing a few times but when we walked in on the last morning, there was a different atmosphere about the place. James and Cian both had a buzz about them. The news was good … the wind was to turn to the South West and they fully expected it to switch on …. We drew up the attack plan and set off with high hopes.

We fished a few marks that morning with no success but when we arrived at our final mark it looked different. Clean, white water and a fizz …. perfect.

Jonny and I stopped to fish a little section while Kenny went on over past us and cast out – FISH!

We looked over to see the rod doubled over and straight away we knew this was a brute of a fish. We reeled up frantically and made our way over to help him. The landing tactics were, lets say creative and a little lucky but the bottom line is, we landed it.

We just stood for a second and looked at the massive bar of silver which sat in front of us. There were no words out of any of us, just pure shock!

We scrambled for the camera, the scales, the length tape and worked quickly to ensure this stunner would swim back safely. At first we hugely underestimated the fish – when we got the weight and double checked we all just burst out laughing with utter amazement. 11 pounds of solid Copper Coast Bass!

I will take the time now to put this in writing – A massive well done to Kenny for landing  a fish of a life time and I think I can speak for myself and Jonny – we are both delighted to be there and to witness such an awesome creature. Will we ever see one as big again? – Who knows but surely that is what keeps us going back each time? …. You just never know!

Pure solid silver – I know this will have a special place in Kenny’s mind for the rest of his life!

The action kept on coming as we got followed and bumped by more Bass up to 6/7lbs but failed to connect.

Jonny had a nice run of three fish in quick succession.

For me it was one of those days, you fish hard and no matter what you do nothing works …. it gets into your head. I had a huge fish take my nice Pearl Gataride, smash it up and straighten my hooks!

It was the perfect end to the trip. What more can you ask for? It just doesn’t get any better – of course we could have nailed more bigger fish that day but even to see one was the icing on the cake.

This seemed to be the lure for the trip …. It accounted for pretty much all the Pollack, Schoolies and Jonny’s Bass on the last session. I had been smashed up a few times on mine, but sadly it got hammered to bits. I will be trying my best to fix it but I fear it may be beyond repair ….

These lures are awesome … the action and vibration is like no other lure. Having these in your lure box is a must the next time you set off for Bass. A particular favourite of ours was the PM Hot Shad – a killer in slightly coloured water. 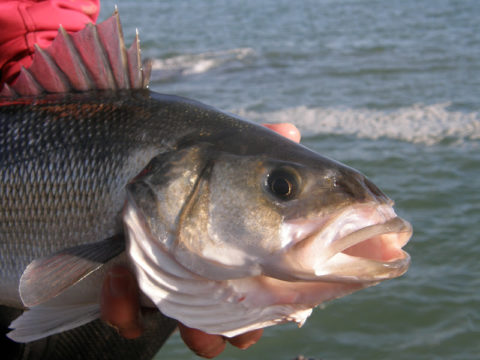 All things must come to an end.

Of course we were sad to be leaving, but what a trip! We worked hard for all of our fish but we all were rewarded in one form or another. We connected with some serious fish over the trip. We had lures lost, smashed, hooks straightened and soft plastics ripped to bits but eventually it all clicked into place and we landed our first double figure fish!

As always a huge thanks to the lads at Absolute Fishing, it is always great to go in, chill out and of course buy shiny new lures. It was also great to get a catch up with Henry and finally get speaking to Del Thompson who I know had a blast of a time, getting his first ever Irish Bass!

A huge thanks to Kenny and Jonny, it is great to spend time fishing with like minded individuals who have a true passion for the sport.

As much as I would like to be back on the Copper Coast before the year is over I highly doubt it will happen …. but never say never ….. stay tuned!