‘It’s not the fish you catch, it’s the peace of mind you take home at the end of the day’. 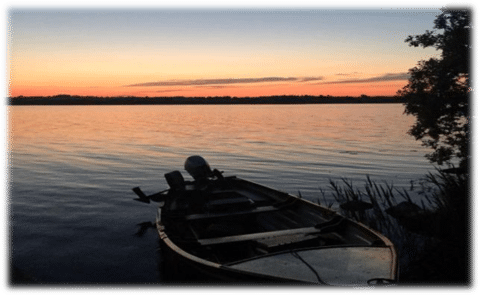 Bank holiday Monday kicked in on Lough Sheelin with blue cloudless skies, bright sunshine and temperatures sticking at 20 degrees plus, perfect for the Bar B Q but rubbish for fishing.

Only a scattering of anglers fished during the day with little or no success. The cool of the evening and spent fishing was eagerly anticipated only for the weather gremlins to be at work producing an impressive thunderstorm – heavy downpours intermingled with an uncomfortable amount of sheet lightening (carbon fibre nervously being a good conductor of electricity) which sent even the most ‘die hard’ anglers off this lake.  It is a known fact in the angling world that usually after a thunderstorm, trout rise to the surface in big numbers (something to do with atmospheric pressure) and so armed with this knowledge many anglers returned later in the evening, after the rain had stopped only to be chased off by another storm which literally rolled in less than an hour later behind the first one effectively clearing everyone off the lake for good and wiping out the first fishing day of the week. As one angler put it to me – ‘we spent more time sheltering than fishing. We got to see some spectacular lightning if nothing else! There were some fierce heavy downpours and there was so much static in the air I got a shock off my fishing rod – like an electric fence sort of shock!’ 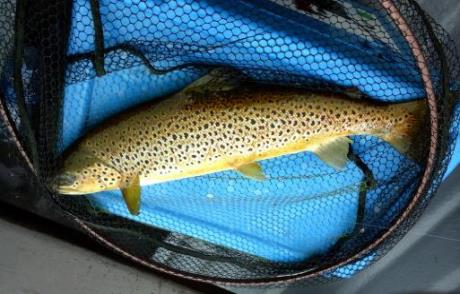 The warm sultry weather continued throughout the week and although there was good cloud cover on most days and great hatches of mayfly, the fishing during the day was poor and sluggish with nothing much happening.

At a stretch (and it would be a stretch) there is another week left of Lough Sheelin’s mayfly season but regardless of the high catches being recorded in previous weeks (and this is purely down to the high numbers of anglers who have been fishing here) this mayfly season has been a difficult and frustrating one for many, nothing has been easy and it’s been a tough slog for most. 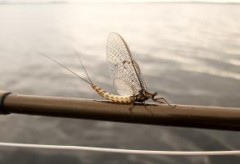 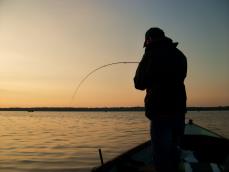 Frustration is setting in at this stage of the angling season where anglers can see the fish but can’t catch them and are trying to figure out why and also because many have used up their holidays with little or no fish to show for that annual leave sacrifice.

So, who is to blame for the lack of catches (because we Irish always have to blame someone or something when things don’t go according to our plan) and where on earth did Duffers Fortnight go??

The term ‘Duffers Fortnight’ is a misnomer, a myth. This fortnight supposedly provides the inexperienced fly fisher with fourteen days of easy fishing at the start of the mayfly hatch.  It is reputed to be a time when the fish practically jump into the boat and any mayfly or spent pattern gets results.

Truth be told there cannot have been four days during the mayfly hatch, let alone fourteen, where fishing was consistently easy on this lake. With the accusations flying as to whose fault is it that the fish in this lake are not taking all and sundry when offered, I came across a book by JM Hills called ‘ A Summer on the Test’ written in 1924, where this very experienced fisherman describes his mayfly experience and which I felt compelled to include in this week’s angling report which goes: – 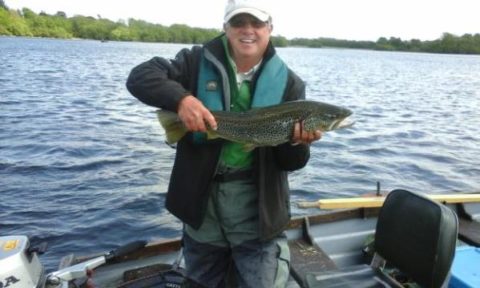 Tudor Owen, South Wales with one of the heavy weights for this week a lovely 6lb 10oz Sheelin trout caught on a Pheasant Tail Nymph (released)

The heaviest fish for this week was a 6lb 12oz trout caught by Stephen Collins, Bangor, Co. Down 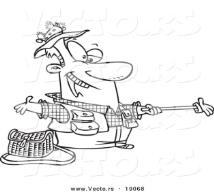 Anthony McCaffrey, Derry – 2 trout at 4lbs and 3lbs on a Spent Gnat pattern 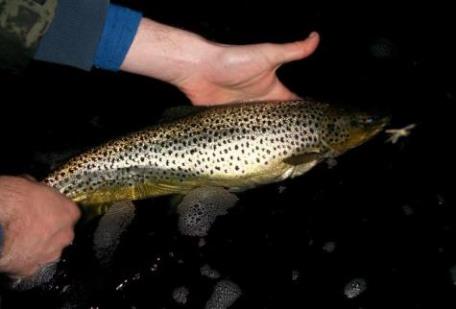 The hatches and the flies…

‘Mayfly fishing is proverbially uncertain. You get days when trout will take anything, when the most dreadful bungle will not put them down, and when they mind neither thick gut, bad casting nor wretched imitations.  But such days are rare.  Looking back over many years, I can only remember a few.  And, to put against such days, I remember many more when trout were wonderfully difficult, when fish were feeding steadily and yet accurate and delicate fishing met with scanty reward.  I am talking, be it noted, of days when all is in the fisherman’s favour, when there is not too much fly and trout appear hungry and eager.  But you have even greater obstacles to overcome when there is a glut of fly.  Both the newly hatched and also the spent insect sometimes come down in masses which no one would believe possible who had not seen them.  The water is covered, trout are not taking one fly in a hundred, your artificial has to float among droves of naturals and there seems no imaginable reason why the fish should ever take it’.

So if it’s any consolation to those that had a bad Mayfly and who struggled on Sheelin– 92 years ago the same problems existed, where heavy boat traffic, large number of anglers and angling report writers were few and far between….. 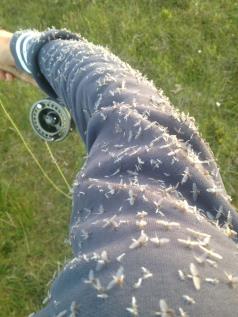 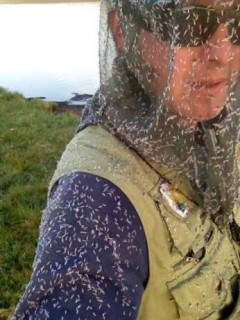 The flies that dominated this week were the spent gnat patterns and for the past seven days most of the catches were caught from 9pm and through the night.

I’m told the best time for fishing this lake now is to wait until the setting sun brushes the tops of the surrounding shoreline trees, just before it sinks out of sight.  This is reputedly the prime time for catching fish on Sheelin in June.  A spent pattern with a white foam body with a turn of red at the tail worked its magic and some trout of over 6lbs were successfully landed using this pattern.

Another good working combination was a size 14 Klinkhammer as the point fly with the second fly a size 14 Sedge pattern. The Wulffs featured strongly as well with the Gray, Royal, Green and Yellow landing some fine fish.  On windy days a Royal Wulff ginked at the top to make sure it drags in the wave proved to be a good plan.

The Sedges are starting to make an appearance with a tentative degree of success as it’s still early days for them on this lake. 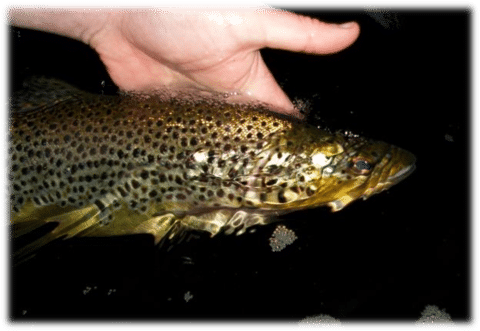 But I concede that it is disappointing for everyone –

Here it is, Lough Sheelin, 4500 acres of limestone lake, full of brown trout of varying weights including a large number of 4lb plus fish. This lake is full of trout food in all layers – asellus, gammarus, snails, caddis larvae for the bottom, nymphs and pupae of varying insects in the middle and for the  surface – the emergers, adult flies (mayflies, buzzers, sedges and olives) and the terrestrials.  The experts tell us that up to 90% of trout feed sub surface and although there is now plenty of surface fly life in the form of emerging mays and spents, sedges, the odd Murrough and some terrestrials, the trout are fairly well stuffed before they even get to the top so any feeding that goes on lacks urgency and is really only a dessert rather than a main course so there isn’t the frenzy of feeding that there might be on other lakes.

This year Sheelin’s mayfly numbers were spectacular and for this all anglers should be eternally grateful because the mayfly – Ephemera danica is a barometer to water quality and the fact that there are so many on this lake would suggest a healthy ecology.  There were impressive falls of spent which continued during most evenings of this week particularly around Church Island, off Crane Island, Stony Island, Wilsons pt. and around Inchicup.  These dying insects carpeted the surface water, their death throe struggles in the surface film alerting the trout to their presence and bringing the heavy fish along with their less weighty companions up to the surface to feed.  Anglers reported seeing some serious fish and good movement of trout to the spent but despite this our Sheelin trout in general did not seem interested in the imitations and even the most skilled anglers struggled.  Maybe there is too much fly, trout get gorged, they allowed natural after natural to float past them and inducing them to take an artificial can be a long and tedious business. 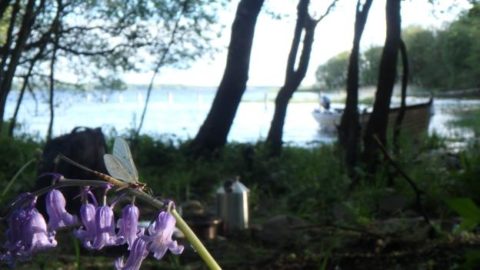 This week the numbers fishing the lake tailored off considerably as the day trippers and mayfly anglers disappeared to leave the real Sheelin fishing advocates in place. The spent fishing for some was good and there was enough surface action to keep the anglers attention.  Regardless of how difficult the lake has been, no angler has failed to be impressed with the abundance of fly life and most have witnessed numbers of large trout as well as many juveniles.  Despite all the frustrations Sheelin’s mayfly is undoubtedly a chance to catch a big wild brown trout dazzled by the abundance of food that for the rest of the year lurk out of sight.

We are now into that in-between stage on Sheelin – between the mayfly and the sedge and the necessity for studying what exactly the fish are feeding on is now essential.  There are a few Murrough, a few bloodworms and perhaps the odd trout are feeding on caenis, there is undoubtedly a multitudes and confusing array of maybes……….. 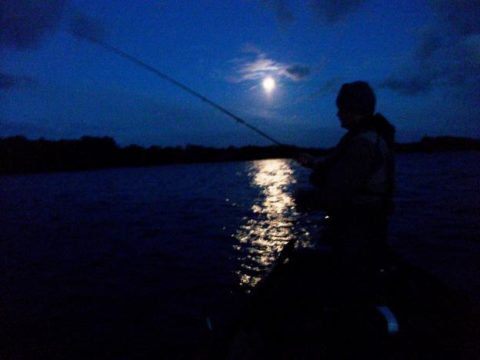 One of the ‘vampire’ anglers on Sheelin 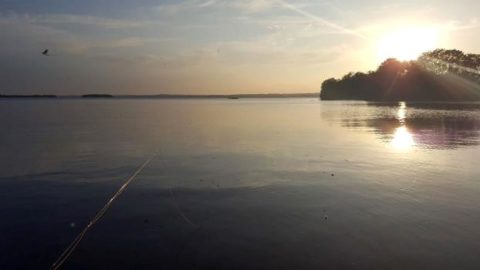 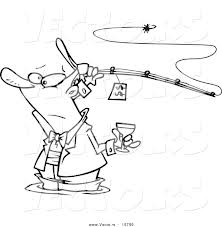 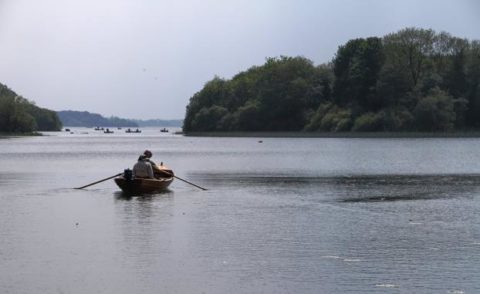