It’s an amazing achievement that the Royal Enfield Coarse Angling Club, County Meath, has been hosting its annual summer Junior League for over 40 years. The event has welcomed many new anglers to the sport of recreational angling while also bringing on some of elite of Irish anglers over the years.

On the 4th of September 2017, the club held the presentation for this year’s summer Junior League, being the culmination of four nights fishing in July, each on a Monday evening at various venues along the Royal Canal around Enfield. 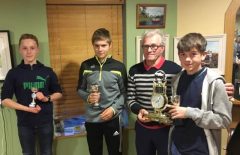 Over the 4 matches, 32 juniors ranging from 5 to 18 years attended.  The 32 were made up of 20 boys and 12 girls, who all punch well above their weight.  In order to balance the field, the overall results are computed on an Over -12 year old basis and Under-12 year old basis.

In the Over-12s section, sponsored by Michael Payne, the winner was Adam McGraith and he was presented with the Michael Payne perpetual trophy. Cillian Flynn came second, while Jack Brazier was third.

The Under-12s section, sponsored by Niall Sutton, was won by Mary Cummins. Lorcan Fawcett was second, while Oisin Fawcett was third.

All 32 juniors who fished received tackle prizes and a medal to mark their participation and achievements during the league. 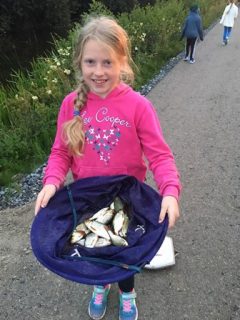 Photo: At the Royal Enfield Coarse Angling Club summer Junior League was Emma Collins with her catch of 1lb 2.5ozs

Royal Enfield Angling Club would sincerely like to thank Inland Fisheries Ireland (IFI) for the generous support of this event.

Present at the presentation were Councillor Enda Flynn of Meath County Council, Mr Sean Ward of the National Coarse Fishing Federation of Ireland, and all the club’s Junior Anglers and parents.

During the presentation, a special photo collage was presented to Cillian Flynn who proudly represented Ireland and Royal Enfield CAC in the recent Junior Angling Championships in Cork.