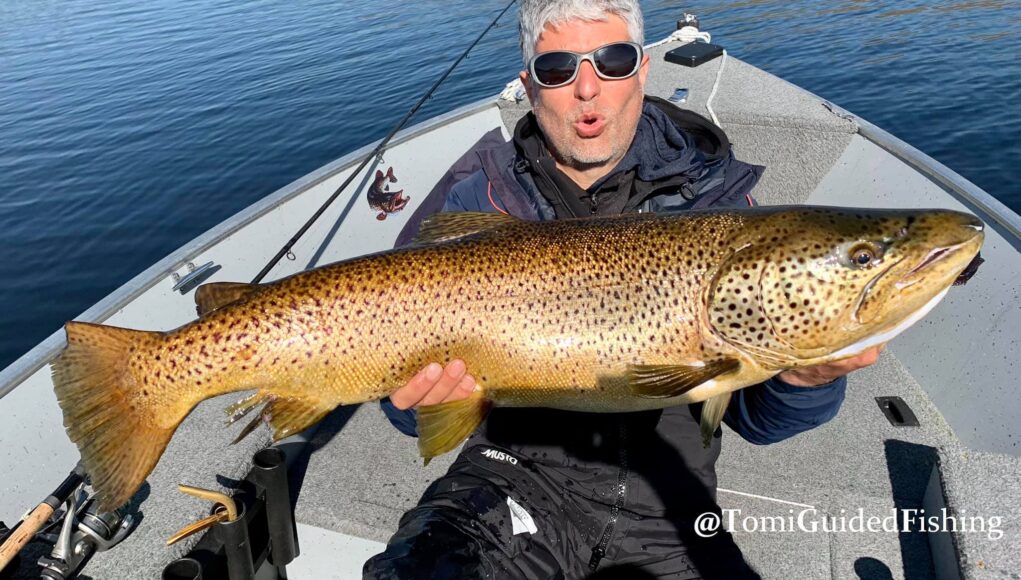 Big fish guide Tomi Kurman may be still out targeting big pike, but he wrote a round-up of what was an epic trout season for him and his guests on Lough Corrib, despite the spring lockdown which meant no fishing for a long part of the early season. Tomi and his partner also welcomed a new arrival in July (congrats guys!) which meant another break from fishing!

So that’s it! 2021 TROUT SEASON is now over. And what an exceptional Season it was. Exceptional and strange at the same time. Season started on February 15th but because of the travel restrictions (Covid-19) we were unable to venture to the real Ferox grounds until April 13th…. Then in July we had a break from fishing for just over a month due to a new family arrival and also temperatures were too extreme for safe fishing. Ferox welfare is always my priority so we just stepped back for a while. At the beginning of August we were back in action again, and I think the Ferox appreciated that move because they were happily visiting my boat in numbers…

My official scorefor the Season is now 122 Trout over 65cm. The magical number 100 was boated on 22nd of August and that was a huge achievement…. When I started count I was hoping for 50!  We have also caught a lot fish which just missed the count because they were a little too small, but they were there too.

in total we hunted Ferox over 42 days (some full days, some mixed with pike, some just short sessions due to the bad weather). Out of 42 days we blanked 8 times. That meant we have not caught fish, we lost fish, or we caught one too small for the count… that makes an average catch rate of 3 Ferox per day over total days or 3.6 Ferox over the day which made the count! This season we have missed the best of brown trout fishing, when normally we would have days with 30-40 wild trout caught PER DAY, but I’m sure we will have a go at them next year.

The biggest fishof the Season was 91cm, and over 20lbs beauty, followed by two different fish measured at 89.5cm (90cm is a Holly Grail of any Ferox angler!) another exceptional fish was 85cm and weighed at 18lb 12oz! A future record for sure!!! From 122 Ferox over 65cm, we have produced 38 SPECIMENS by length (>75cm) or 45 SPECIMENS by weight (>10lb) according to Irish Specimen Fish requirements.

Along with the great trout catches we also had some BIG pike, where current count is 40 fish over 100cm! (Season for pike still runs). Some of them caught as “by catch” while trout fishing and some as a result of planned targeting….Now enjoy a collection of some notable catches and if you want to be included in Next Season COUNT just drop me a line. Bookings for next season are open for February and March for now. Following months will be open after New Year, to accommodate corporate and regular bookings and also after dates of big Fishing Competitions and World Championships are announced.