The island-studded bay, bounded to north and south by magnificent mountains and guarded by the great bastions of Clare Island and Achill, is another of Ireland’s finest sea angling regions. The boundary between the North Western and the Western Fisheries Regions runs through the bay and this section confines itself to the northern half, with its main centre at Newport. The equivalent centre in the Western Fisheries Region is Westport. Details of this half of the bay are given in the Western Board’s guidebook. Sea angling festivals take place in June, July and August.

The southern shore of the Curraun Peninsula has a number of rocky outcrops, offering spinning for coalfish, pollack and mackerel and occasional garfish, bottom fishing for bull huss, conger and dogfish. In addition there is good float-fishing for wrasse at Corraun and Whiteheather Cottage, while Altapheebera adds bottom-fishing for flounder and plaice. High water is best. Lugworm can be dug in a small bay to the west of Corraun. The immense strand at Mallaranny provides fishing for dogfish, flounder, ray and small turbot. Specimen bass have also been taken there. Flooding tide is best, especially at night. From the pier, there is spinning for mackerel and pollack and float fishing for wrasse. Sandeel can be dug in the coarse sand on the banks of the main channel at Mallaranny. There are extensive lugworm and clam grounds to the east.

Mullet marks are at the outflow of Lough Furnace and at the pier in Newport, ground-baiting is essential in both. Furnace has yielded a number of Specimens. Newport Quay is also a good site for spinning for sea trout and bottom fishing for flounder. Three of the many promontories on the eastern border of Clew Bay are noted for dogfish and bull huss. Rossanrubble also provides ray and spinning for mackerel, Ross adds flounder and Rossnakilly
small pollack.

Clew Bay has long been a favoured ground for big skate. Newport-based charter craft can be used either to fish within the bay for bull huss, dogfish, monkfish, ray and skate or to seek the shark grounds off Achill and Clare Island. The Irish Record white skate was taken there in 1966.

The Newport Sea Angling Festival takes place over the last weekend in July, with shore angling on the Friday and boat-angling on Saturday and Sunday. The Eddie Gibbons Memorial Competition for boat angling is on the first Sunday in September. 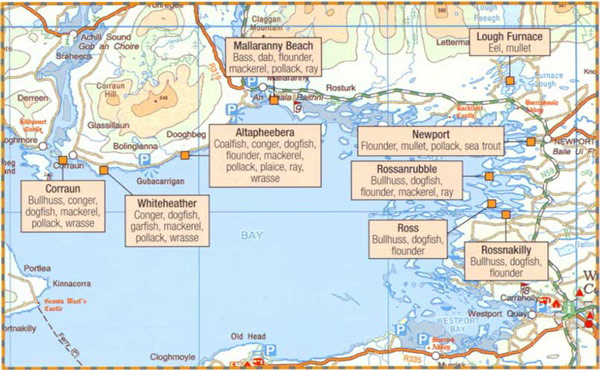