A large headland, standing out into Donegal Bay from the western seaboard of County Sligo, Mullaghmore is a deservedly popular holiday place with a great reputation for sea-angling. Many of the visitors who come to stay there in the summer are attracted by the fishing – in addition to the beautiful strands, a good hotel and a choice between self-catering cottages, a caravan park and a number of guest houses. The village grew up around the harbour which is the base for a number of licensed boats, fully equipped for shark and tuna. Fishing is good around the Mullaghmore headland itself and the village is a good base for exploring a variety of sites up to 8 miles (13 km) down the coast. Tide times can be calculated by adding 6 hours to Dublin predictions.

Mullaghmore Pier, on the sheltered side of the headland, looking back across the strand to the mountains of Sligo, is a haunt of mullet and the source of many of specimen size. They are taken on pieces of fish or bread at high water. The breakwater, at the harbour entrance, yields dab, flounder, plaice and occasional ray in summer. On the exposed, rocky north coast is Darby’s Hole where the gently sloping rocks provide excellent fishing for big wrasse. Lugworm can be dug at the eastern end of Mullaghmore Harbour at low water. To the south of Mullaghmore, and a little way off the beaten track, the main river channel at Milk Haven Estuary offers flounder, sea trout and mullet in plenty. Freelining sandeel in the channel can be excellent sport for sea trout, especially from the sand bar on the northern shore. Casting into the surf yields occasional plaice. Lugworm and white ragworm are plentiful at the top of the estuary.

Farther south, approached through the village of Grange, is Streedagh, an area of sand dune and rock, distinguished for its fossil corals which look like stone cabbage stalks. Streedagh Strand, best fished at dusk on a flooding tide, provides flounder, ray and dogfish. The shore of Streedagh Point, nearby, consists mainly of large boulders and can be fished safely only for two hours either side of low water. Spinning, on the northeastern side of the point, is excellent for big pollack, up to 8 lb (3.5 kg). Float fishing close to the rock is ideal for wrasse, present at times in large numbers. Cloonagh Bay, 4 miles (6 km) southwest of Streedagh, has a sandy north shore and rocks to the south. Flatfish and dogfish may be caught to the north and pollack to the south.

Blue shark arrive towards the end of July and remain till October. Bluefin tuna come late in August and stay till November. A record fish of more than 900 lb (410 kg) has been caught and the average weight is around 400 lb (180 kg). Mullaghmore is an ideal spot for fishing for these giants. Bottom fishing is available all the year round for a great variety of species. The most popular quarries include pollack, coalfish, cod, ling, pouting, wrasse, conger and ray. The island of Inishmurray, with its ancient monastic ruins, is half an hour’s cruise from Mullaghmore and surrounded by 20 fathoms of water. There are several reefs on its northern side with abundant pollack and wrasse. In the sound between Inishmurray and the mainland, tope, ray and dogfish are plentiful.

The Connaught Open Boat Championship is held at the end of July and there is a shark competition early in September. 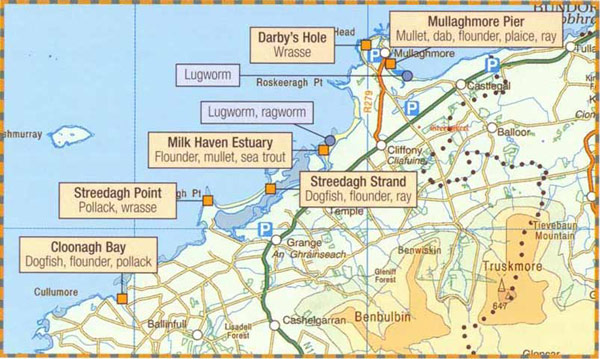 Charter boats in the North Western Board

Tackle shops in the North Western Board