The busy County Capital of Sligo stands where the River Garavogue meets the sea at the head of Sligo Bay. The Bay is bounded to the north by Roskeeragh Point and to the south by Aughris Head. Its eastern coast is deeply indented by the estuaries of the Drumcliff, Garavogue and Ballysadare rivers, all of them stripping at low tide to enormous sand flats. All three are rich sources of lugworm and The Drumcliff estuary at Carney yields clams.

Rosses Point, at the entrance to the inner Sligo Bay is a good spot for spinning for mackerel and sea trout in summer and can yield bass. Coney Island, at the mouth of the bay is approachable from the land only at low tide. Flounder and sea trout can be caught in the main channel. The rocky promontory of Strandhill, surmounted by the stone age mausoleum known as Queen Maeve’s Tomb, is a popular seaside resort with a fine beach. Flatfish can be caught from its southern end and occasional bass in autumn. Across the channel from Strandhill, Portcurry Point also yields flounder and sea trout, with a possibility of tope. Mullet can be plentiful there in hot weather. The southern outpost of Sligo Bay, Aughris Head, has good beach fishing for flounder and dogfish with possibilities of tope and ray.

The Turbot Bank, 8 fathoms (15 metres) deep, lies northwest of the mouth of Ballysadare Bay and produces turbot, ray and dogfish. A better-known mark is The Ledge, 4 miles (6 km) to the west of Coney Island. Covered by 15 fathoms (27 metres), this ridge of rock, with pinnacles rising to within 5 fathoms (9 metres) of the surface, offers good pollack fishing, especially at dusk, together with ling, conger, tope and bull huss. Wheat Rock, south of Raghley, is a source for large skate, caught on the sandy bed. There is a small harbour on the eastern side of Aughris Head which gives access to good ray and tope fishing for the inshore boat angler. 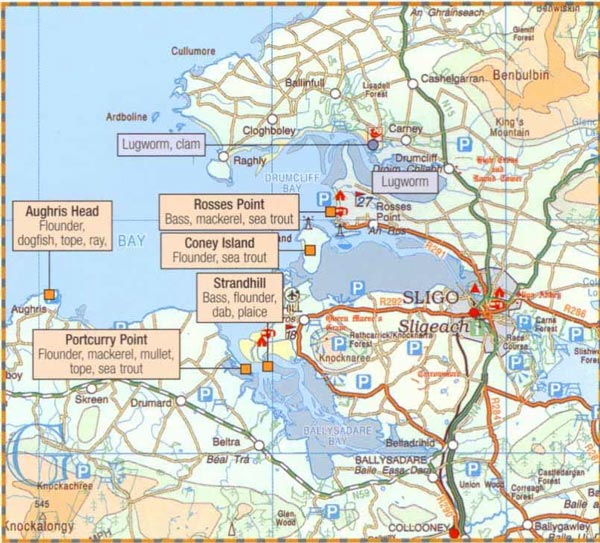