The name translates as ‘the mouth of the Mullet’ and the Mullet is a very remarkable peninsula, running some 15 miles (25 km) from north to south, shielding the west coast of County Mayo from the full force of the Atlantic Ocean. The ridge of land which leads to Belmullet separates two great bays, Broadhaven to the north and Blacksod to the south. Both have a fantastic variety of beautiful strands and rocky shores and both are fabulous places for angling from the shore or by boat. And besides the two bays, there is the ocean coast. With easy access to shark and tuna – and to sheltered bays in stormy weather, Belmullet is renowned as one of the very best sea angling centres. Specimen Fish from Belmullet taken between 2000 and 2004 were 4 tub gurnard, 2 cuckoo wrasse, a red gurnard and a sea trout. With hotels, guest houses, tackle dealers and charter boats, it is self-sufficient and an ideal base for a long visit.

Two small fishing harbours on the rugged north Mayo coast are within reach of Belmullet. Porturlin and Portacloy provide bottom fishing for flounder, dab and eel with float fishing for mullet and spinning for coalfish, mackerel and pollack. The inner pier at Portacloy yields dogfish, flounder, plaice and turbot. Rinroe and Rossport, on the east side of Broadhaven Bay, have channels inviting spinning for sea trout and bass and bottom fishing for flounder. Rinroe is best on the last hour of ebbing tide and the first two hours of flood. Rossport is later, from two hours after low water until high tide. Lugworm and crab are obtainable a little way to the north at Rinroe pier and sandeel can be dug from the banks of the channel.

Ballyglass Lighthouse, on the western side of Broadhaven Bay, standing above a rocky ravine, and Ballyglass Pier, at the southern end of a shallow bay, are both good for a variety of fish and techniques. Spinning yields coalfish, mackerel and pollack and float fishing provides wrasse. Bottom fishing at the lighthouse is for conger, dogfish and pouting, and off the pier for dogfish, flounder, plaice, ray and turbot. To the west of the lighthouse is Pollacoppal with beach fishing for flounder, ray and small turbot and spinning from the nearby rock for mackerel and pollack.

At the mouth of the long narrow inlet called the ‘Blind Harbour’ there is spinning for pollack and sea trout, best during the last two hours of flood and first hour of ebb tide. Lugworm are plentiful south of the boatslip. Longish walks to the cliffs at Glenlara and Erris Head lead to rocky platforms – which can be slippery and dangerous. Both offer float fishing for wrasse, bottom for conger and dogfish and spinning for coalfish, mackerel and pollack. Erris Head is also a good spot for gurnard.

On the west coast, there is good bottom fishing from the pier at Frenchport for conger, flounder and ray and spinning on a flood tide at dusk for sea trout. Lugworm and crab may be found close to the pier. The rocky outcrops on the southern side of Annagh Head are good for spinning for coalfish, mackerel and conger. There is float fishing for wrasse and bottom fishing for dogfish and conger. Below the golf course at Cross, surf fishing yields dogfish, flounder, sea trout and small turbot. The 6-mile (9 km) stretch of beach between Corraun Point and Glosh Tower offers bottom fishing, especially near the rocky outcrops, for dogfish with a possibility of sea trout and bass. Spinning, from the rocks below the tower, is good for mackerel and pollack.

At the southern end of Blacksod Bay, Blacksod Point has pier fishing at high water for conger, dogfish, flatfish and ray and, at times in the summer when whitebait are abundant, excellent spinning for coalfish, mackerel and pollack. Spinning is also good from the rocks to the south of the pier. Within Blacksod Bay, Elly Bay is a popular bathing beach with a car park. Bottom fishing yields flatfish and dogfish and lugworm abound below the car park. Ground baiting at the quay in Belmullet brings mullet within reach for float fishing. Lugworm and clam can be dug to the west of the town. On the east side of Blacksod Bay, at Geesala, the channel between the sand flats yields sea trout and occasional bass to spinning. There is bottom fishing for flounder and sand eel can be dug in the banks of the channel.

Boat angling based on the Mullet offers endless variety: the open waters of the Atlantic invite anglers in fair weather, while Blacksod and Broadhaven Bays are sheltered – and equally productive. The Irish Record Halibut was caught in the region of the Stags of Broadhaven in 1972. Turbot are also plentiful and many Specimens have been taken, including a former Record weighing 32lb (14.7 kg). Charter boats are available at Belmullet and at Blacksod. At least 36 species of game fish are caught regularly in the region. The list includes four species of ray, three gurnard, two wrasse together with blue shark, bluefin tuna, brill and bull huss, coalfish, cod and conger, dab and dogfish, garfish, halibut, John Dory, ling, mackerel, megrim and monkfish, plaice, pollack, porbeagle and pouting, red sea bream, scad, spurdog, tope, torsk and turbot, white skate and whiting – and quite a few others.

The knowledge and know-how of the local skippers exceeds any information that can be set down in writing. But a few marks are worth mentioning as appetisers. Species in the region of Blacksod include monkfish, spurdog, bull huss and scad as well as the more common ones. The offshore grounds between Achill Head and Black Rock offer some giants: blue shark and porbeagle, halibut and bluefin tuna and huge catches of cod, pollack, coalfish
and ling have been recorded. Broadhaven Bay is great for gurnard, turbot and monkfish and rocks off Glenlara have deservedly earned the title of the Haddock Rocks.

The most exciting area on Broadhaven is the tide-race off Erris Head which claims to offer some of the very best fishing anywhere in Ireland. Coalfish up to 20 lb (9 kg), big cod and pollack, turbot, gurnard and cuckoo wrasse are all plentiful. This is also one of the few places where brill and megrim turn up with any degree of regularity. The Irish Record megrim was taken there in 1986. 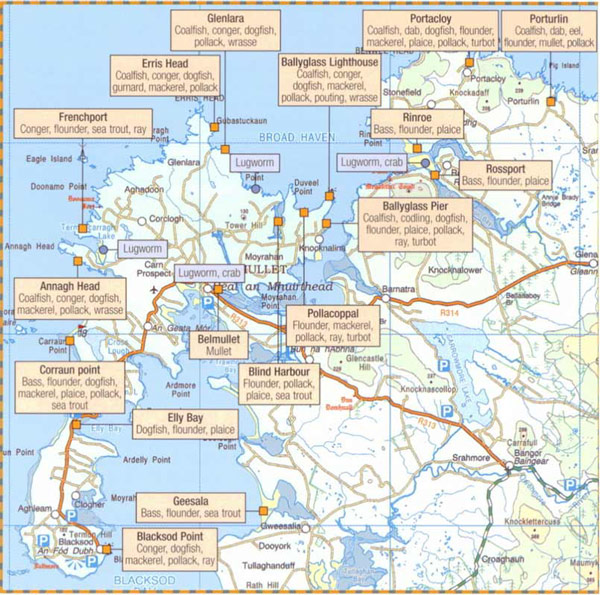