Joined to the mainland by a causeway and bridge, Achill is the biggest of the islands of Ireland and boasts a wonderful combination of small seaside resorts with a wilderness of splendid mountains and rugged moorland. Its coast has cliffs, superb strands, little harbours and rocky shores – all the variety a shore angler could want, with the addition of charter boats equipped for cruises in pursuit of shark, tuna and dozens of smaller species. The Irish Record porbeagle was caught off Achill in 1932 and the Record blue shark in 1959. Specimen Fish caught from 2000 to 2005 were 8 tub gurnard, a red gurnard, a ballan wrasse and an electric ray.

Moyteoge Point and Keem Bay, near the western tip of the island, offer rock fishing for mackerel and pollack and beach fishing for coalfish, dogfish, flounder, turbot and ray. Moyteoge demands a long walk over heather and rock but the rewards make it worth the effort. The strand at Keem is easily reached by an exciting road. Basking shark can be seen there in early summer. Purteen Harbour is good for mullet, after ground-baiting and was the source of a Specimen conger in 1985. The magnificent strand at Keel, bordered to the north by deep water under the Meenaun Cliffs, yields dab, flounder, ray, sea trout and turbot. A 14 lb (6 kg) sea trout caught there in 1973 held the Irish Record for 10 years. Dugort, on the north side of the island, has an old pier and beach, yielding dab, flounder and ray in autumn. The pier at Darby’s Point, close to the mainland at the southern tip of Achill, is good for spinning for mackerel and pollack, with flounder for bottom-fishing. Lugworm can be dug in a backwater to the west of the point.

Achill has a long tradition for first class offshore angling. The many reefs and rock pinnacles include the Bills Rocks, Achill Head, Dysaghy Rocks and Saddle Head. Besides the Irish Record sharks, Specimens have included coalfish, dab, grey and tub gurnard, hake, megrim, pollack and a red sea bream. 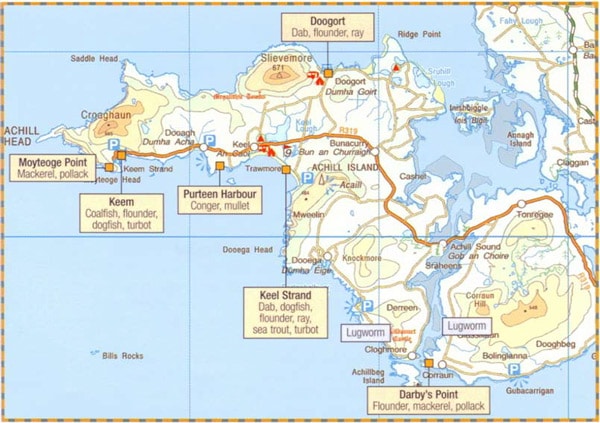