Dave Houghton from Active Irish Angling reports on annual King of Clubs 2011 in the Arva Gowna area of Co. Cavan.
Kevin Rowles is the 28th King of Clubs Champion. Adding his name to an illustrious list of match fisherman, his title was well earned across five days of arduous match fishing in gale force conditions.

The winning total catch weight was 74.810 kilos total and the new champ pocketed an estimated £2,000 cash. There were plenty of fish to be caught and Kevin – who was fourth last year – took full advantage of the situation and he kicked-off on the Killykeen boat house stretch of Lough Oughter with 13.350k (29lb) and was overall top man for the whole event.

His catch consisted of one 2k bream, two at 1k with backing skimmers and hybrids while fishing a groundbait feeder at about 25m.

Day two had Kevin fishing on Rockfield Lake and he won the section from a middle peg with 14.160k (31lb) after catching 40-plus skimmer bream on a groundbait feeder with worm and caster.
You can do no better than beat the man either side of you, and that’s what he did on the third round on Gulladoo Upper Lake with 9.380 (20lb) made up of 130 roach and perch while pole fishing shallow.
This was Kevin’s third consecutive week in Ireland and so far he had a 5th place in the Gowna Festival and 5th in the Arvagh Festival and now the 45 year was beginning to wonder if it was going to be three in a row – or could he improve on the scores?

The popular grass bank at Killykeen was fourth in his section rotation and this is where most of the bigger weights had come from and it was fingers crossed the fish were still in the mood. Kevin drew peg one, which had won the opening day, and it was obviously the area to draw because peg two won the next two days. And he proved to be the man for the job and battered roach, hybrids and a few perch – in fact he had 270 of them – pole fishing shallow with caster for a fantastic 29-080k (64lb) haul.

Wow! Now the Devizes match group man had a comfort zone of 11 kilos ahead of last years’ champion Lee Klimczuk and just the final days fishing ahead. He put his hand in the bag and came out with peg 10 on Glasshouse Lake – which had won the section twice and peg nine had been a winner too, so once again there were fish to be caught.

While Kevin began on the pole it wasn’t right and the fish were edgy so he swapped to a groundbait feeder at 35m into almost three metres of water and that was it. From then on it was a bite a chuck on worm that produced roach, perch and hybrids for another section win with 8-540k (18lb). With four section wins and a fourth it is no wonder he is the 2011 KOC champ and well deserved too!

Peterborough’s Lee Klimczuk (Bait Tech) was a gracious runner-up with 64.860K (143lb) that included two section wins and the honour a being a day winner when he took 21.600k on Killykeen green bank. “It was exciting sport”, recalled last year’s festival winner. “Killykeen was very windblown so I chose to use a 7m pole with caster up in the water and loose fed caster. The method produced roach ranging from two to 12 ounces”.

Third placed Nail Mallinson (Wakefield) has been outstanding this autumn and a run of three five-day festivals has produced more than £3000 in cash prizes. Week one was the Gowna Festival when he was second, then he moved won the Arvagh Festival.

And then it became “One, two, three O’Leary” as Neil performed better than most but simply didn’t get the run of pegs, which is so very important in a talent-loaded field of anglers. 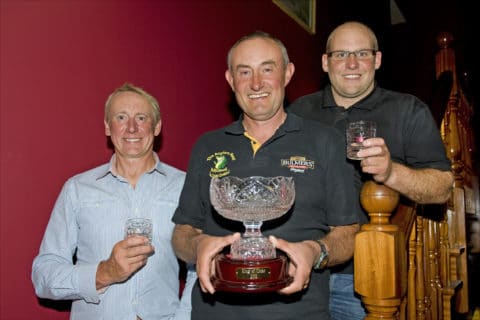 Finally, the great news is the the flag ship event will continue in 2012 and perhaps run another 28 years. Still sponsored by Tourism Ireland, it will in future be known as the Arvagh King of Clubs and will take place during the same week, so Monday to Friday 10-14 September 2012. And angling holidays can still be booked with Irish Ferries, co-sponsors of the event since its inception.