“I’m going out to fish,” Simon Peter told them, and they said, “We’ll go with you.” So they went out and got into the boat, but that night they caught nothing.’ -John 21:3 This was a week of contradictions, a clashing of opinions as some anglers reported continuous blanks with nothing much happening out on the lake while others enthused about the good fishing and plenty of action with the sedges, all of which coins the well versed idiom ‘you pays your money and takes your pick’.

The weather was unsettled with cold at the start of the week but with temperatures rising mid week to a sluggish embracing warmth peaking for Sheelin at 21 degrees. Frequent changing winds directions repeatedly blew the calm off good feeding stretches and Sheelin, particularly during the day, retained its reputed moody, unpredictable and challenging reputation.

Trout were feeding close to the surface, their noses high necessitating a pretty accurate cast, just a foot or so infront of the fish.  Fly life during the day was scarce and the windows of opportunity were small.  There were some catches during ‘office  hours’ mostly caught dragging wet flies as well as a few on small dry sedge patterns and a number using ‘the hang’ or more commonely referred to as ‘the washing line’ method.  This is an effective way of fishing nymphs by placing a floating fly such as a booby fly on the point and suspending a nymph or two on the droppers.  This technique is a great way of suspending nymphs through the water column and can be done with a range of sinking lines to put the flies into the target depth.  A nice 2 ½ lb trout was caught by Dublin angler David Smyth using an Orange Booby on the point and suspending a Claret and a Black Midge pattern from the droppers.  A 3 ½ lb fish was also caught by another Dubliner using a foam Booby on the point and three nymph patterns on the droppers one of which was a Holographic Diawl Bach on a floating line.  Using this method the point fly barely goes down in the water while the droppers sink to varying depths.

The heaviest fish for this week was a trout just shy off 7lbs caught by Peter McArdle, Dundalk on a sedge pattern 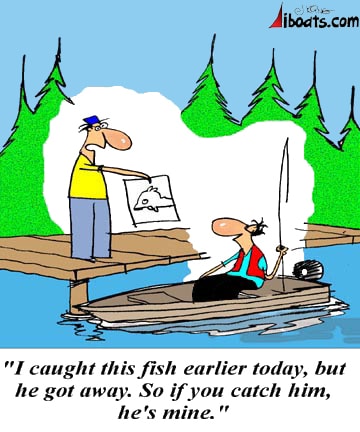 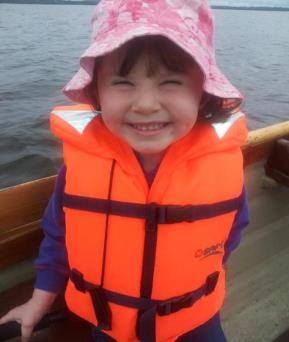 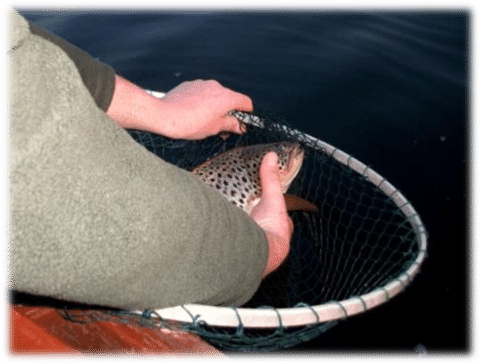 With the weather being predominantly overcast and an oily ripple on the surface for most days, wet fly fishing with patterns like the Silver Invicta, Wickhams Fancy, the Bibios and the Kate Mclaren had reasonable degrees of success. The use of natural or black cdc Emergers fished on the surface worked for some anglers. The cdc emerger in it’s many guises suggests an emerging insect caught in the surface tension of the water. Cdc emerger patterns are many and varied and include the ‘yellow owl’ shuttlecock, the brainchild of scots angler Bob Fitzpatrick, other variations include the natural cdc, the black cdc, fiery brown, hares ear and red too name but a few. Being armed with at least a few cdc shuttlecock emergers is not a bad plan for Sheelin.
One long time Sheelin angler repeatedly tells me that summer on Sheelin means hoppers, hoppers and more hoppers. Hoppers are a good general suggestive dry fly to use when you don’t know exactly what the fish are feeding on. They roughly represent many species including adult buzzer, daddies and hawthorns. The Bristol Hopper is one of the best patterns to use.
Another top fly is a pattern called Bobs bits, invented by Grafham angler Bob Worts, this simple dry fly is meant to be fished well sunk in the surface film and has had its own modest degree of success on Sheelin and is well worth a try at this stage in the season. Bobs bits are a favourite of angling author Denis Moss and he lists his tried and tested ones in his book ‘Trout From a Boat’. There are big stands of weed in the lake at the moment – Canadian Pondweed and Potamogeton are in situ both along the margins, in bays and further out around Corru and Inchacup. These food rich havens offer the wild trout a year round food source in the shape of freshwater shrimp, hog louse and a plentiful supply of corixa or lesser water boatman. Damsel nymphs and cased caddis also inhabit these myriad weed beds and hatch throughout the day into adult blue damsel and sedge flies which hover and flutter enticingly above the beds on warm summer days and sedges late into the evenings, black needle or grouse wing and great red sedge can all be imitated by the angler in the dying light of the day. Anglers would do well to seek out the weed beds and get a feel for their shapes and as they begin to die away at the latter end of the season take advantage of the cover that they will offer to roach and perch fry from marauding trout which will dive head long into the weed to intercept their prey.
The best of this week’s fishing remains from 6pm onwards and into the night. The Green Peter has made its appearance with a number of fish caught in the darkness around Watty’s Rock, Corru and Inchacup. For good Green Peter fishing ideal conditions are a soft wind to your back, blowing from the shore, too much wind can kill this sedge fishing. The Murroughs although in evidence were patchy. 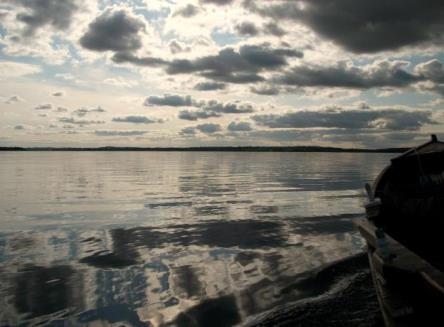 Unsuitable weather or not, Sheelin is in the middle of its sedge season and the most vulnerable time for the sedges are when they are emerging, when they are on the surface drying their wings and when they return to the water to lay their eggs. Because the larger sedges, like the Murrough have big wings, it takes that bit longer to dry so they have to speed across the surface of the water in an attempt to get to the safety of the dry land and this is where a great many of them are taken by trout on the prowl, alerted by their efforts to get ashore. With a sedge rise, the angler really has to be there when it starts as because of the size of the sedge, the trout can only consume so many and that done goes down again to digest the meal, the window of opportunity is small and if missed the angler is confined to the sporadic trout taking the late emergers which are few and far between.
Sedges are late evening pursuits and particularly for the Green Peter, a lot of the time anglers end up fishing in the blackness of the night, fishing blind guided only by the noise of the fish taking the insect and this is where an understanding of the thrill of the sedge fishing becomes clear – where in total darkness, it is the anticipation of the take and when it happens nothing can compare.

The flies most used this week by anglers were the Murrough, a Small Brown Sedge (12-14 or smaller), Klinkhammers, , the Bibio, Gorgeous George, Yellow Humpies, the Fiery Brown Sedge, the Chocolate Drop, the Grey Flag, hoppers, the Hare’s Ear Sedge, the Alexandra, the Sooty Olive, the red-tailed Green Peter, the Sedge Invicta, the G&H Sedge, the Black Pennel, the Claret Pennel, the Welshman’s Button, the Diawl Bach, the Pheasant Tailed Nymph, a variety of Bumbles, the Dabblers (Silver, Pearly and Green) and the Silver Invicta.

A look around Sheelin