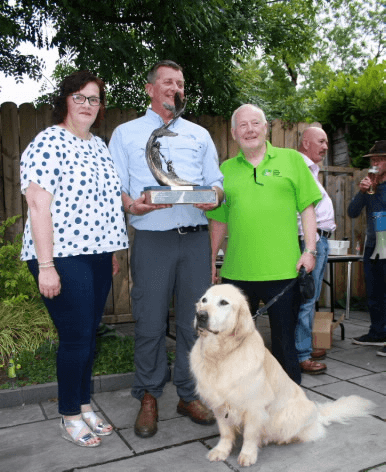 A total of 84 anglers took part in the fundraising event with 33 fish  caught (16 fish caught on Lough Mask with a total weight of 22.76lbs. & 17 fish caught on Lough Corrib with a total weight of 35.8lbs.) Results of the fishing competition fundraiser were as follows with a fantastic turn out for the 2019 “Cast A Line for Autism” Wetfly/Dapping fishing competition.

The winner on the day was Mark Dermott from Lurgan with a total catch of 2 fish for 7lbs.   Mark received the ‘Cast A Line for Autism’  Children of Lir Trophy, a Dinner voucher for two people at Ashford Castle Hotel and a picnic basket full of goodies sponsored by Salmo Salar Ltd. Mark also had the heaviest fish of the day which weighed 5.10lbs.and received the Dick Gibbons  Memorial Trophy along with a beautiful print by Cornamona Artist Eamon Gavin. Top Lady Angler went to Sue Kidby with 1 fish for 1.14lbs. Sue received the Vincent Dodd Trophy along with one day’s fishing for two rods at Delphi Lodge & Fishery and a framed Salmon Fly called  ‘The Galway Ranger’ tied by Phil White. Secret Weight prize went to Barry Molloy from Cong. Barry won  entry to the World Cup fishing competition 2020  sponsored by the World Cup Committee. His fish weighed 1.2lbs.

Dorrie would  like to say a big “Thank You” to Lydon’s Lodge Hotel in Cong for hosting the event, to all the anglers who participated on the day and to the non-anglers who supported the event by purchasing raffle tickets at the weigh-in. Special thanks go to all the sponsors who provided prizes for the competition, their support is invaluable. The total amount of money raised on the day was a whopping €5,807 and further pledges are still to be received.

“Cast A Line for Autism” has raised €26,207 for charities who support children with special needs.