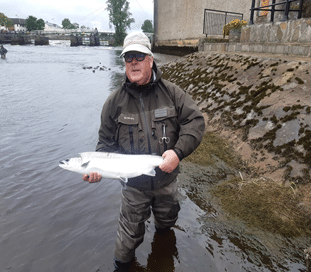 Slightly better weather for the week, drier but still very cool with highest temperatures of 15° Celcius contributed to lower water which was suitable for many of the fisheries in the catchment. Fly, including bubble and fly performed well with the low water levels. The grilse have started to appear, and any flood should trigger a run of fish. Week on week angler numbers are increasing which has resulted in bigger salmon catches. There were 178 salmon recorded for the week with a good percentage released again.

Staring at the Ridge Pool, 16 salmon were recorded caught for the week. Current water levels now mean that the Ridge Pool is fly only at the minute.  A lot of smaller salmon were caught with Richie Stenson catching one of the bigger salmon for 9.5 lbs. on a Cascade before releasing it again.

Mount Falcon Fishery had 6 salmon for the week, on fly and worm, the best weighing 8 lbs.

Knockmore Anglers and Attymass Fishery reported one salmon each for the week.

Roy Buckley from Byrne’s Fishery had 2 salmon all on the worm.

Armstrong’s Fishery reported 4 salmon for the week, all on the worm.

The Foxford Fishery had a busy week with 28 salmon recorded with some released. The best salmon weighed 16 lbs. and was caught on the prawn.

Foxford Salmon Anglers had 25 fish with a good number released. Mostly grilse caught on all methods. Foxford Anglers have two fisheries, Rinnaney downstream of Foxford town has 3.5 miles of single bank and costs €20 per day while upstream of the town, Bakers water consists of one mile of double bank fishing also costing €20 per day. Excellent prices for prime fishing. Permits can be purchased from Tiernan’s Angling Centre in Foxford.

Cloongee Fishery reported 34 salmon caught for the week, and 11 released. Five anglers had 31 between them for the week of which they released 10, all on bubble and fly. Gary Mc Namara from Offaly had 2 fish; one for 3 lbs. on the worm and one 4 lbs. fish on the fly released. Scott Wallsney from Cork caught a 6 lbs. salmon on a spoon upstream of the Dead River.

East Mayo Anglers reported 26 salmon with 13 released. The best fish was caught by keen angler Billy Mc Ghee from Ballyvary for 11.5 lbs. on the fly.