South Shore SAC held the sixth round of their Master Angler series last Saturday on the Murrow beach, Wicklow. This report from the club:

We were fishing 18.00 to 23.00 on a rising tide and expectations were high. Fishing the Wicklow beaches in June always gives good fishing and never disappoints. The Murrow beach gives shelter from the heavy tide runs experienced on beaches just north of Wicklow. The other beaches get drifting weed, which can be a pain and limit bait time in the water. Wicklow is almost the perfect match venue with no real hot spots, as the winner can come from anywhere along the stretch. It does however have one drawback – the sewage works behind the beach belch out gut wrenching smells and is not for the weak of tummy. Any wind with westerly in it will fill your nostrils a glorious pungent smell.

Enough of the smelly stuff, we had a pleasant evening weather wise with no rain, it was a little gusty to start with but that died down and the sun dropped in the best summer wind fashion. 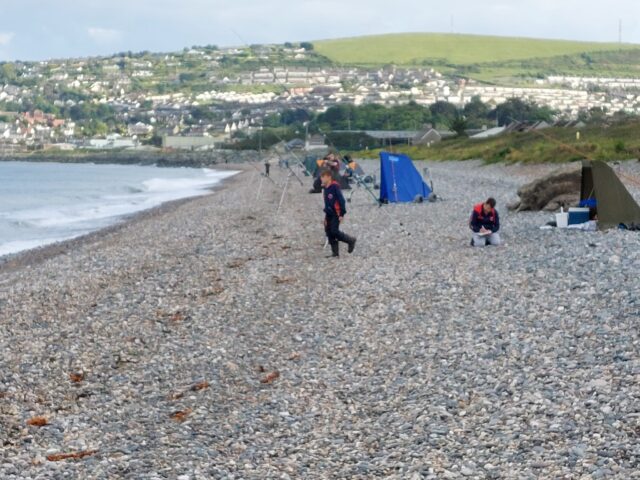 Everyone was expecting a glut of dogfish as in previous competitions on this beach at this time of year in the past. Sandeel baits blasted to the horizon on first casts came back untouched for me, Thomas Keogh the (great white) got a double dog on his first cast which set the scene for the next couple of hours. He certainly capitalised on his uncanny ability the catch dogfish and finished with 12 of the spotty yokes. Thomas finished with 26 fish and the high points accumulated with the 12 doggies gave him the win over Niall who had 29 fish, hard luck Niall.

Whiting as always turned up in numbers on the top of the tide and proved difficult to get in size once your topper uppers were filled. There was a good variety  of fish on show with Ray’s, LSDs, whiting, Dabs, Plaice, Gurnard (grey and tub) – no sign of a smooth hound though.

We had two juniors fishing on Saturday, we put them together on the beach in a novel idea that we will incorporate going forward so that they could compete in the same area against each other. Daniel and Evan had a ding dong battle all night, Evan getting the first fish – a ray. Daniel came back true to form and and streaked ahead mid way through the session with a doggie and a number of whiting. On the home stretch Evan pulled a number of double counters the secure the win. Great fishing young lads, the future of match angling is bright.

Dean Costello was on his usually spot on Wicklow, and murdered fish in zone B. He had a good number of ray and doggies, topped up with gurnard and whiting.

Picture below shows Alby’s half a whiting, so there must have been a few tope running, and he was lucky not to lose his rod!

Well that’s it for a couple of months till September for our next club match, so hope you all have a lovely summer.

Sea angling on the east coast