Andy Burnett of IFI’s Education & Outreach team reports on a super catch for one of their angling students:

17 yr old Cassie Bonner had a cracking introduction to fishing recently as she put some of the theory she had learned to the test in Co. Donegal. Cassie has been taking part in the Go Fishing programme, run by IFI and Foroige, which aims to get young people interested in fishing.

Cassie had completed four online sessions over the past two weeks where she was given an introduction to the basics of angling. She was keen to practice the skills she had learned during the online sessions, and Rathmullan Pier, Lough Swilly, Co Donegal was the chosen venue for the practical part of the course.

The session started well, and we quickly had several young anglers fishing the pier under blue skies and blazing sunshine. There were plenty of mackerel around, so it wasn’t long before we were catching. After a while we decided to change tactics, setting up the rods to fish for some larger species. In no time at all, a procession of lovely thornback rays started to find the baits, with several double hookups encountered.

Whilst reeling in one of the ray, I spotted a good tope follow it to the surface, so we decided to set up a tope rig and put out a whole mackerel bait. Fifteen minutes later and the rod nodded, then the spool began to fizz as line stripped off and the fish made a surging run. Cassie took up the rod at this point, and then under guidance, managed to play the tope to the edge of the stairs where it was carefully landed unhooked and released unharmed, swimming off strongly. We estimated the tope to weigh in the region of 35lb. To catch a fish like that on your first try is exceptional and so Cassie wins this weeks Catch of the Week honour.

After speaking with several anglers, it appears tope are around in good numbers this year, and this was the 5th tope taken from the pier this year. 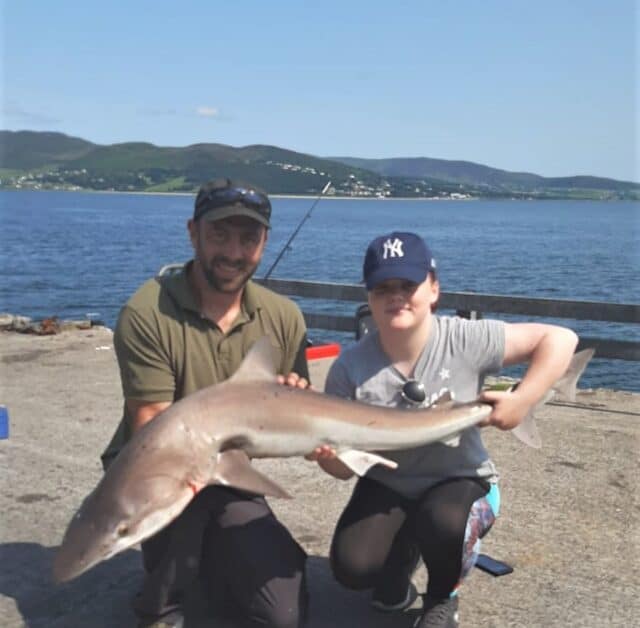