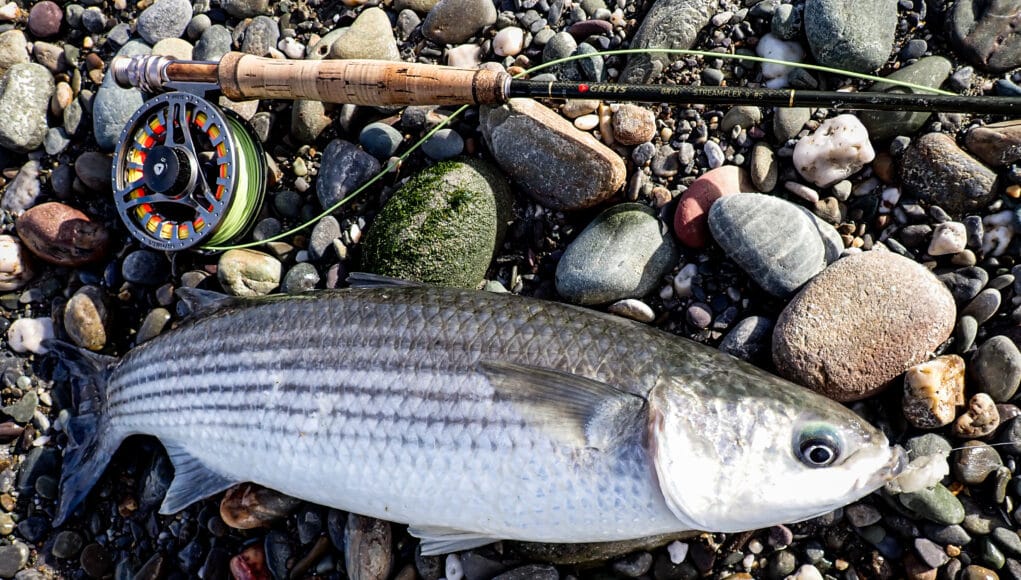 David Norman of West Cork Bass shares some insights from a recent fishing trip targeting mullet with the fly rod and bread fly:

People may tell you that catching thick lipped mullet on a bread fly is easy, I would say it’s one of the easiest of the mullet fly options by far, along with the maggot fly if you can find somewhere to make it work, but it’s still not EASY! Especially early in the year when conditions rarely settle for long.

During the four-hour session that produced this fine fish I got precisely one half chance – Which I missed and one other chance that came more as a gift from the mullet gods rather than anything I had much control over, but the mullet gods sometimes choose to reward a tryer…

I’d had real problems with the wind direction swinging back and forth through as much as 180 degrees and varying in strength from a gentle breeze from behind to a much stronger wind in my face, the stroke of luck came with a brief window of side wind which perfectly held my floating line arrow straight and in place just long enough for this fish, estimated at around 5lbs, to come up out of the depths and suck down my bread fly more like a carp would do, rather than the usual nibbling – which our thick lipped mullet are frustratingly good at doing! So one decent fish landed photographed quickly, released strong and in perfect condition and honour was restored. It’s amazing how one decent fish in tough conditions can make us happy for a good few days after.

On a final note these much under rated, slow growing fish (about the same growth rate as bass so 20 years to get to 10lbs which they almost never do these days) I’m told only spawn biannually and not for the first 3 or 4 years. None of our three inshore mullet species (thick lipped, thin lipped & golden grey) are protected by law in any way and are extremely vulnerable from a host of threats. With some good news last week about the introduction of protection for basking sharks one can only hope that our humble mullet might one day enjoy similar protection, they certainly are an underrated sport fish in my opinion and are available to us early in the year when not much else is possible fishing wise at the coast.

David Norman is a Clonakilty based Bass Fishing Guide and Coach specialising in Shore Based Lure Fishing & Workshops.

Notes: Having intensively fished for Bass (Catch & Release) on the West Cork Coast plus all of the recognised Bass fishing counties of Ireland  I want to share with other like-minded anglers the thrills of responsible lure fishing for Bass on a One-to-One basis over a limited number of trips throughout the key times of the Bass fishing Year, which for me is June – Sept, sometimes earlier or later depending on how the weather is behaving…
I can offer a range of options around key tides, to include night fishing, in a safe and environmentally conscious manner including bespoke workshops to help build knowledge and confidence