Well it all came together for the group last week and in a way they deserved it as when they fished this week with me last year we got almost completely confined to fishing in shelter up the estuary. But this year they got real lucky with the weather and had a very good week that was topped off with another red letter day for us.

The week started with a lovely day on the drift out west of Loop Head and we had a lovely days fishing with plenty of hard diving Pollack and a few Ling and other white fish. Then we did their only day in the estuary when we had lots of Ray and even got a bit of a tope run. The next day saw us out at sea again on a shark drift with some mixed fishing from the bottom. Then a day anchor fishing which produced some Congers and a lovely Rock Ling. Listing all the species we got would take a while but it is fair to say that last weeks fishing more or less produced every fish there is in this area and it was a great variety.

Then on Friday, which was the groups last day we topped it all off! During the week we had joked about getting a Six gill and I said if the conditions were right we would fish on the mark and who knows! It is never a waste to anchor there anyway as we have had some great mixed fishing off it. However, although we have by now hooked into these giant fish around 9 or 10 times, it was the first time I have really set out to try to catch one from the start!

As it turned out the mark lived up to all expectations. Upon anchoring I sent down 2 heavy “Six Gill” rigs and the lads started fishing away as normal. During the first while the lads had turned up Pollack, Ling, Whiting, Cuckoo Wrasse, Conger, Dogfish, Bullhuss, Spurdog and even a little Blue Shark of about 20lbs off the bottom. One of the lads commentated that the fishing was getting quieter as we settled down for a cup of tea and then one of the heavy rods started to nod!! A couple of turns on the reel to tighten the line resulted in a heavy run and we started to dream. It took Simon 1 hour and 50 minuets to get what proved to be another huge Shark to the surface. And although he was offered a “rest” by other members of the crew, there was no way he was handing it over and he fought it well and hard.

The only way you can measure these are by taking marks on the boat but the best we could come up with was 3.6mtrs long and I estimate its weight at 700lbs. All I know is that they are huge fish and they send a tingle down you spine when you see them first below the boat. And what I was very happy about this time was that, although we have now had quite a few of these over the last 5 years, this was the first time I set out with a crew with the expressed intention of getting one. I think it is quite something to be able target Shark of up to and over 1000lbs and again shows that here in Ireland and in Carrigaholt, weather permitting, the fishing is world class. 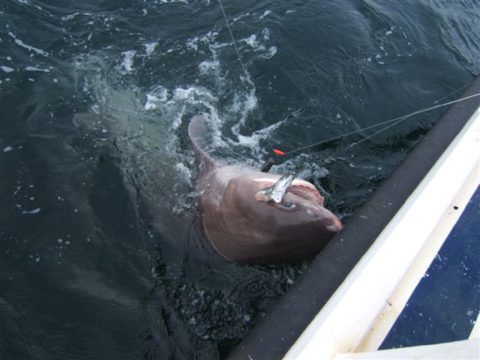